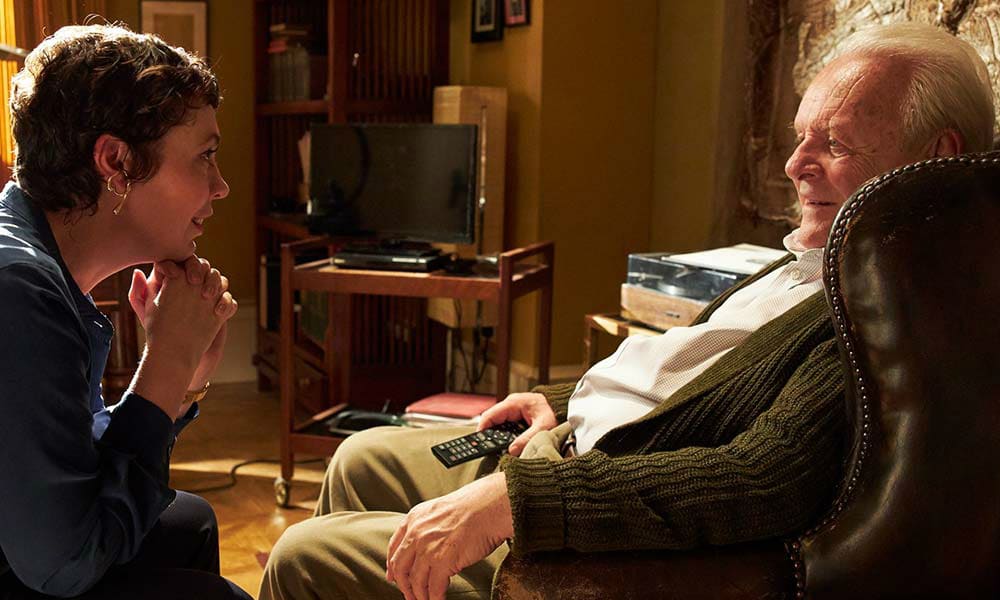 It’s not entirely out of line to suggest the point of life is to extract pleasure where we can. And so it is with director Florian Zeller’s The Father, adapted from his own play and co-written with Christopher Hampton. The film places us in the deteriorating mental warrens of an old man and braces for the worst. So then, where’s the pleasure? To wit: Anthony Hopkins plays the old man.

Owing to its stage-bound origin, the limits of The Father are everpresent. We’re introduced to Anthony (Hopkins) as he lords over his well-appointed flat; until his daughter Anne (a drawn yet somehow luminous Olivia Colman) begins to take him through his day. With minimal fuss from Florian, the film quickly establishes how Anthony’s mind works—and doesn’t. It’s a role an actor like Hopkins can entirely own, talented as he is with gesture, vocal tenor, and the slightest twinkle of the eye. His Anthony can be a man of great booming pride and also a humbled—and deeply confused—geriatric. Florian treats both (and other) versions with care and respect, which does draw out the film’s pleasures even as we prepare for its end.

That end is, of course, obvious, even as The Father jars itself through time and memory in ways that surprise. To make a film based on a stage play presents one challenge, to centre it on a housebound old man another. Fortunately, Florian and Hopkins are still sharp and, together, up to the task.

The Father will be available on digital.tiff.net on March 26