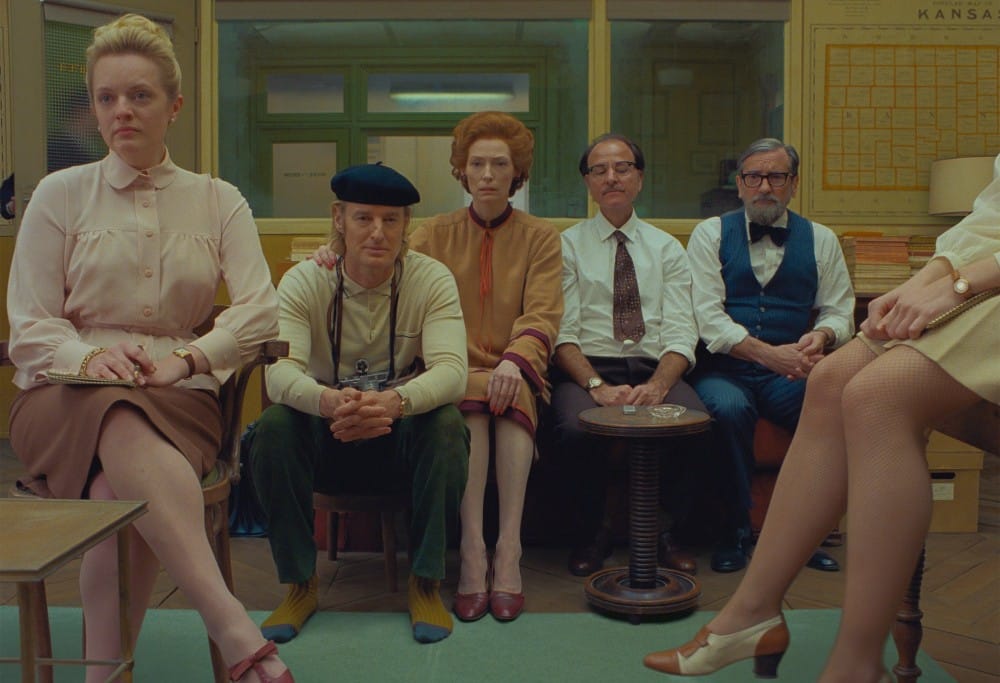 The framing device and literary aspirations of The French Dispatch, the new film from writer-director Wes Anderson, are one and the same. To wit: we’re thrust into the making of the final issue of the eponymous magazine, produced by a masthead of noted writers, and published from a place called “Ennui”, France on behalf of “Liberty”, Kansas. Like much in the film, the quotation marks are a must.

Led by editor Arnold Howitzer Jr. (Bill Murray), Anderson visualizes The French Dispatch‘s copy, first on a zippy, Tati-esque travelogue through town with Owen Wilson, then via a triptych of stories with an endless cast of characters. These include a tale of art and commerce built around Benicio Del Toro (an excellent addition to the retinue), Lea Seydoux (ditto), and Adrien Brody (all three presented by Tilda Swinton); a take-off on the 1968 student riots featuring Timothée Chalamet and Frances McDormand; and an intriguing yarn featuring Jeffrey Wright (as a James Baldwin stand-in). Throughout all this, the words never stop. And while the film’s setting jumps to all manner of vaguely real places, it unfolds as a purely Anderson-ian invention, complete with a narrative delimited by the director’s well-noted faults. On one side, we’re given a tribute and nostalgic trip, an ode to travel and history as told through literary prose. On the other, we get a gag delivery system, which sometimes works, even in hollow or obvious ways, but also doesn’t. The jokes of those aforementioned place names, for example, write themselves, especially as the film travels through time—and, naturally, longs to go back home again.

Howitzer’s other repeated advice also doubles as an edict for The French Dispatch: “Try to make it sound like you meant to write it that way.” If Anderson’s goal was to animate—quite literally at times—that spirit, it’s hard not to say he succeeded. This is definitely a film made with intention, misguided or not. And so we arrive at a different travel cliché, less worldly perhaps but just as fitting: your mileage may vary.