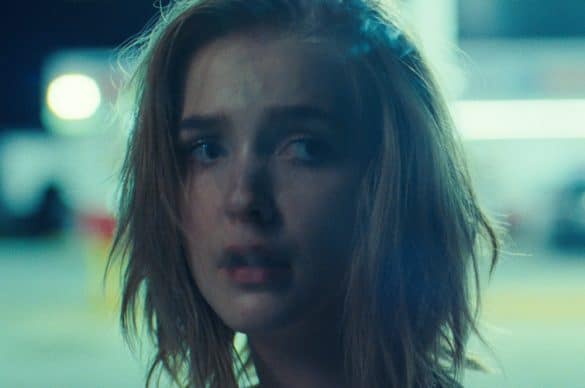 There’s dream logic in writer-director David Raboy’s The Giant that’s supposed to justify his rather ostentatious filmmaking decisions; these include lots of barely lit night shoots, overlapping visual flights of fancy, insistent cuts on loud noises, and oodles of impossible to parse melodrama. If you squint really hard, you can see what Raboy is maybe getting at—youth’s resistance to the change wrought by growing up—except his approach totally fails his story.

For Charlotte (Odessa Young), the end of high school opens onto a future of uncertainty. There are few specifics about her past though, and we remain in the dark about what’s ahead. We do know she has an ex-boyfriend, Joe (Ben Schnetzer), a best friend Olivia (Madelyn Cline), and a concerned dad (P.J. Marshall). Oh, and her mom committed suicide—though why that happened remains vague too. Meanwhile, panic has gripped Charlotte’s town because someone is killing its young people. It’s a stressful situation made more so by Raboy’s oppressive visual choices and impenetrable writing. At one point, we’re told one of the victims was stabbed 47 times (laughably specific) and the only logical reaction to have is: uh, what? It really is hard to get a grip on any sort of reality here.

Instead, Raboy aspires to tap into some of that rural Terrence Malick energy. Except his film doesn’t drift so much as loom, often gathering like a nightmare and resisting any and all meaning. It’s like Malick with a concussion. Coupled with its teenaged cast, The Giant somehow combines all of high school’s worst qualities: it’s incoherent, overwrought, and silly.