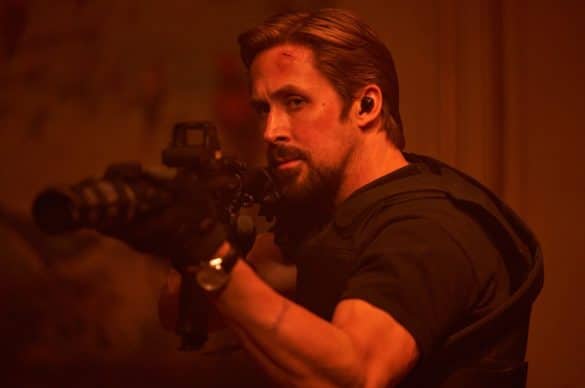 It’s not unfunny that directors Anthony and Joe Russo titled their latest film The Gray Man. These are filmmakers who, despite apparent access to unlimited resources, have never quite managed to land on a particularly vivid image. Everything in their films runs together—even when working with a cast of beautiful movie stars in a globe-trotting adventure of escalating action. At this scale, it’s almost impressive.

The central figure of The Gray Man is Six (Ryan Gosling), a convict granted release provided he becomes a super assassin for the CIA. On that note, mission accomplished: for the next two hours Six fights with everything and everyone at hand while in planes, trains, and automobiles. With Gosling’s unique command of the screen, this becomes a novel feat; the film’s plot, however, is anything but fresh. Based on the book by Mark Greaney, with a script from Joe Russo, Christopher Markus, and Stephen McFeely, we’re treated to well-worn narratives involving a top-secret tech MacGuffin, the safety of a young girl with a heart condition (Julia Butters), and, sigh, Six’s core trauma. The Russos’ over-reliance on whip pans notwithstanding, the film really does have some explosive action to recommend, though at the same time it doesn’t quite know what to do with its actors (including Ana de Armas, Billy Bob Thornton, and Alfre Woodard). And while Gosling does silently command, Chris Evans’ performance as the film’s chief villain only manages to fruitlessly order the screen around. It’s also laughable (or eye-roll-inducing) that the film is pitched as the start of a longer arc, rather than an end.

There is a Spy vs. Spy sensibility in The Gray Man that’s dying to get out. Despite their madcap TV-comedy roots, however, the Russos smother it with layers of faux-emotional seriousness. So while it’s possible to be wowed by parts—a raucous setpiece in Prague, for example—much of the film feels like an excuse to spend Netflix’s money. Will we remember anyone’s efforts here in a month? My guess is no. And that’s not the kind of legacy a film like this should inspire.