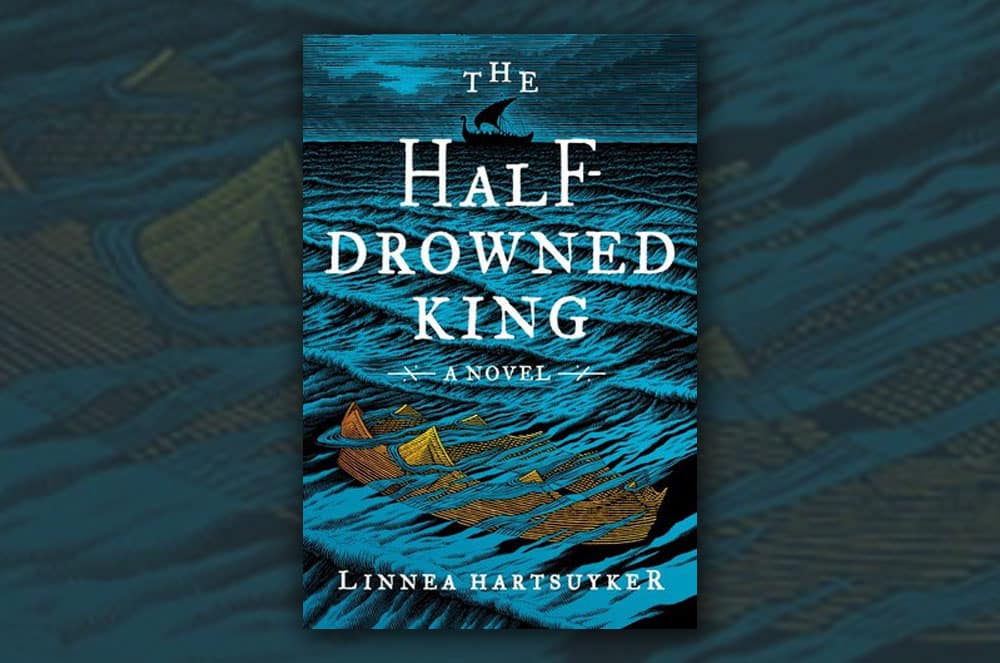 The Half-Drowned King is the history of the Norsemen told in book form, and most likely draws on the Game of Thrones craze as an influence. Yet despite some obvious parallels (it reads mainly as the story of the Greyjoys, and even then not really), the book is more like The Song of Achilles by Madeline Martin, retelling mythical history and adding a little bit of modern language in its retelling. Despite this attempt to brand the book (and a quote by Martin is front and centre), The Half-Drowned King is very much its own story.

Linnea Hartsukyer presents an early action sequence as prefiguring the rest of the story but unfortunately I was still trying to learn the names, and I wasn’t sure what was going to happen (or really what was happening at all). Yet this scene informs the story of the legend of the half-drowned king, which is a sort of ironic title given to the character of Ragnvald Eysteinsson, who serves as the major hero of the story, and centres upon his attempt to strike down his stepfather Olaf (sort of Hamlet-esque, although this story came much earlier). The tales of Ragnvald who is very much alive, having not fallen dead to the attack of his stepfather, has adventures that involve, well, a lot of drinking, a fair bit of screwing, and some bloody battles along the way.

This is all in an attempt to save his sister Svanhild, who is about to be trapped in a loveless marriage to a man with scarred and deformed legs from his battles, and an enemy of Ragnvald. There is a strange point in the book in which the parallel stories converge, and the more exciting of the two, that of Ragnvald, gives way to the one that seems to be the less exciting, that of Svanhild, to the point that the Svanhild chapters become greater filled with depth and complexity, reversing the trend, and making Ragnvald, sympathetic at first, come off as more of a jerk, a principled and noble one, but a jerk nonetheless. The ending will surprise greatly, and knowing that King Harald made an attempt to capture the English crown all the more relevant and canny.

The Half-Drowned King was provided by Harper Collins Canada in exchange for an honest review. It may be purchased from your friendly independent bookseller or other fine bookstores.