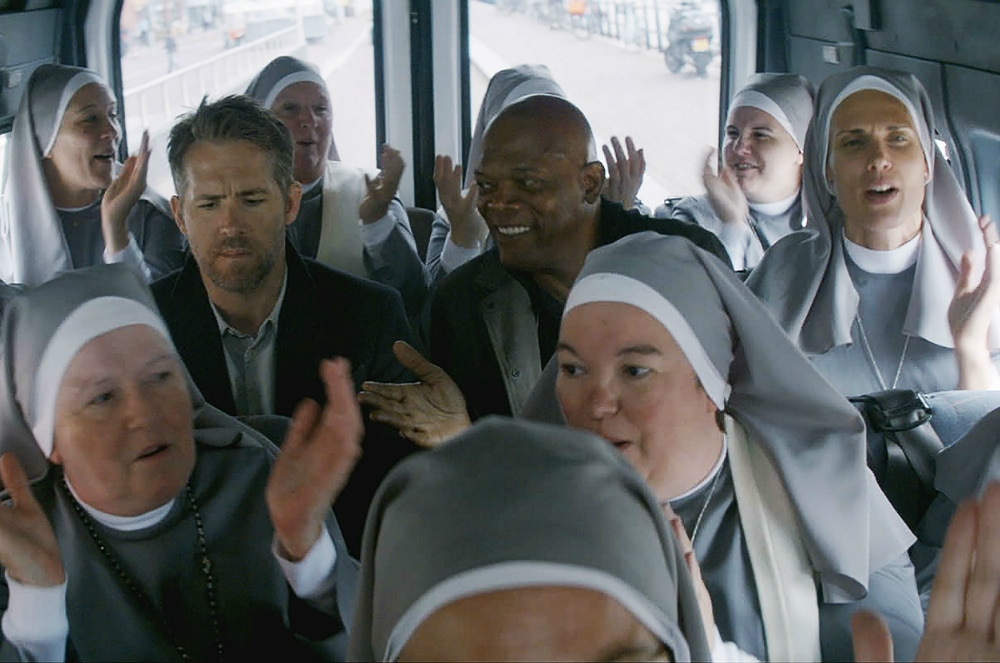 The Hitman’s Bodyguard arrives as a late-summer adult comedy as a sort of Wedding Crashers but with a lot more (mostly cartoonish) violence. Ryan Reynolds is Michael Bryce (suppose that they wanted the most generic name for him possible), but really he’s Ryan Reynolds, although toned down slightly and playing the straight man for most of the movie. Bryce is a down on his luck bodyguard, a sort of ill-repute cleaner for scumbags like Richard E. Grant (who doesn’t appear again in the movie), and aims to offer Triple A protection services but instead pees in a bottle in a car that smells bad.

Samuel L. Jackson is…well, it’s like he’s playing the Samuel L. Jackson of Pulp Fiction and Black Snake Moan, and Snakes on a Plane and every other movie in which he utters a certain word, to the point that this film actually calls him out for overusing said word. Well, he is actually playing Darius Kincaid, the titular Hitman and other than have a wife played by Salma Hayek who swears a lot in English and Spanish, has very few actual character traits other than being every other vengeful Samuel L. Jackson character.

There’s some business with INTERPOL, and this helps to introduce Elodie Yung as Amelia Roussel (or as Bryce has her on his cell phone, PURE EVIL), and despite not having much of a character other than “vengeful ex”, Yung is actually something of a revelation and perhaps should get more roles that take advantage of her talents (she’s not used nearly enough on Marvel’s Daredevil).

The movie is essentially a hitman and a bodyguard on a road trip, in which the two of them trade barbs and get knocked down and then get back up again, all in an attempt to make it to the trial of an evil super villain in the tradition of Vladimir Putin, played by an unbilled famous non-Russian actor. In the tradition of Wedding Crashers, the film is far too long by a good half an hour, but like that one, may be a late-summer sleeper hit, if an audience enjoys a Hard R movie with jokes, some sort of plot development, a ton of swearing, some violent antics and a lot of fun.