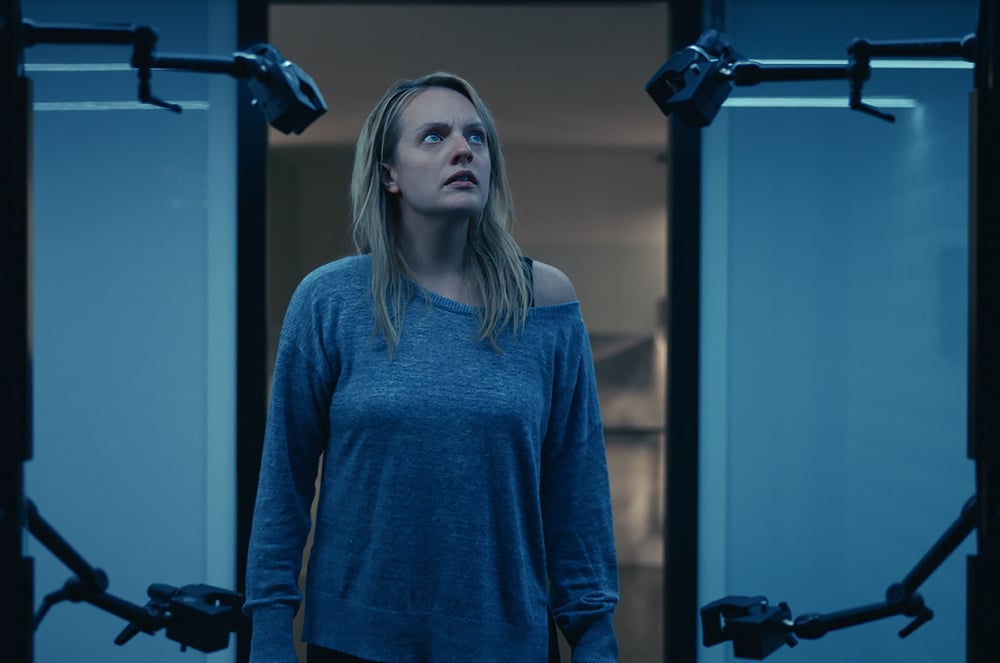 We’re told the titular man in writer-director Leigh Whannell’s The Invisible Man is an expert in the field of “optics.” Don’t laugh, this is how Whannell has chosen to update the tale of Adrian Griffin, first named—and made visible—by H.G. Wells in 1897.  His film does not merely revel in high-tech gear however, even as it finds some of its terror in the idea of someone always watching. It instead pivots to Griffin’s girlfriend, opening a whole new and novel way to see an old story.

Cecilia (Elisabeth Moss) is the girlfriend in question who escapes Griffin’s clutches, running into the arms of her sister Alice (Harriet Dyer), cop friend James (Aldis Hodge), and his daughter Sydney (Storm Reid). Owing to this shift in focus, The Invisible Man is at first about Cecilia overcoming some abusive relationship trauma; but also, since this is a Whannell film, it’s scary and unsettling. Case in point: it doesn’t take long for Griffin to re-appear (in a manner of speaking) to torment all involved. The setup—creepy tech and all—allows for an unreal scenario, albeit one rooted in some all-too-common gender dynamics, e.g. the reasonable man and “crazy” woman. For her part, Moss finds the balance needed to convey the very real emotion in which the film is dealing, while also playing up its more wild (and circumspect) moments; her all-out fight in an “empty” house is a highlight in this regard. The rest of the cast, meanwhile, slots neatly into place too, making it hard not to cheer for Moss’ Cecilia to win back her life.

This feeling is aided by Whannell’s approach in The Invisible Man, which sticks to Cecilia’s perspective but makes sure to capture the empty corners of every room. For much of the film’s first half, viewers will even find themselves staring hard at couch cushions to see if they’ll move. That’s effective suspense, and it’s a tad disappointing when Whannell moves away from subtler touches into full-on thriller mode. Moss is up for the challenge, of course—but we can’t unsee what maybe could have been.