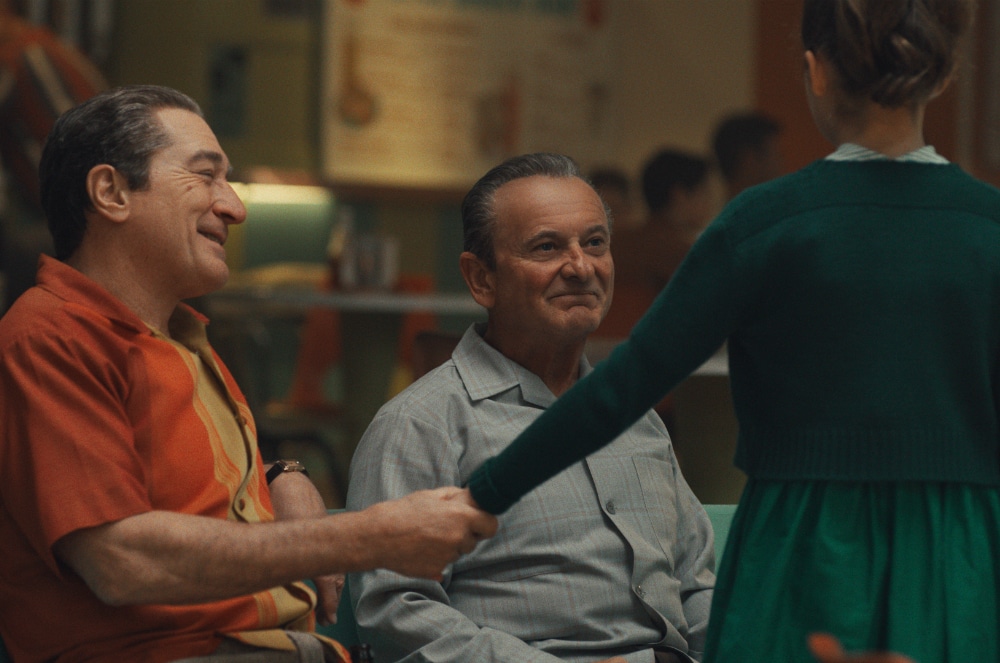 While it’s true Martin Scorsese’s late-period work continues to get longer, it’s not without good reason. The veteran director’s new film The Irishman, written by Steven Zaillian, is indeed his longest yet, coming in at a whopping 209 minutes, but this isn’t a filmmaker lacking in self-control or revelling in excess. The film’s length is actually inextricable from its intent; the life at its centre is painfully long, and we’re meant to feel that weight.

Said central life belongs to Frank Sheeran, played by Robert De Niro throughout with help from digital de-aging and blue contact lenses (both only partially distracting). We first meet him in an old age home as he recounts a stately drive with Russell Bufalino (Joe Pesci) from Philly to Detroit—including significant stops along the way—and everything that got him to this final exhausted point. For Frank, that “everything” includes working for the Mob, the Teamsters, and as Jimmy Hoffa’s right-hand man. The Irishman immerses itself in that specific history, with its explosions of violence (part of the job, of course) and various legal and illegal political machinations (ditto). Within that framework, the film benefits from Al Pacino’s performance as Hoffa, his energy juicing much of its extended middle third. To Pacino’s aid, Scorsese brings his usual active camera and clearly delights in illustrating the connections between the criminal underworld, the Kennedys, the Bay of Pigs, and, of course, Hoffa’s eventual disappearance. De Niro’s Sheeran, meanwhile, is a participant, but also a bystander, all that time amounting perhaps to less than he thought. It means something to us though.

In truth, there are parts of The Irishman that Scorsese and his long-time editor Thelma Schoonmaker could have cut. These sequences—like an extended riff on fish storage—are there because we’re meant to consider the passage of time as it happens. The film is long not just because there’s a lot of material to get through, but because we’re meant to weigh the significance of all these accumulated moments—for Frank and everyone else. In that sense, Scorsese’s film is a monumental work. And besides, what’s three and a half hours of your life by comparison?