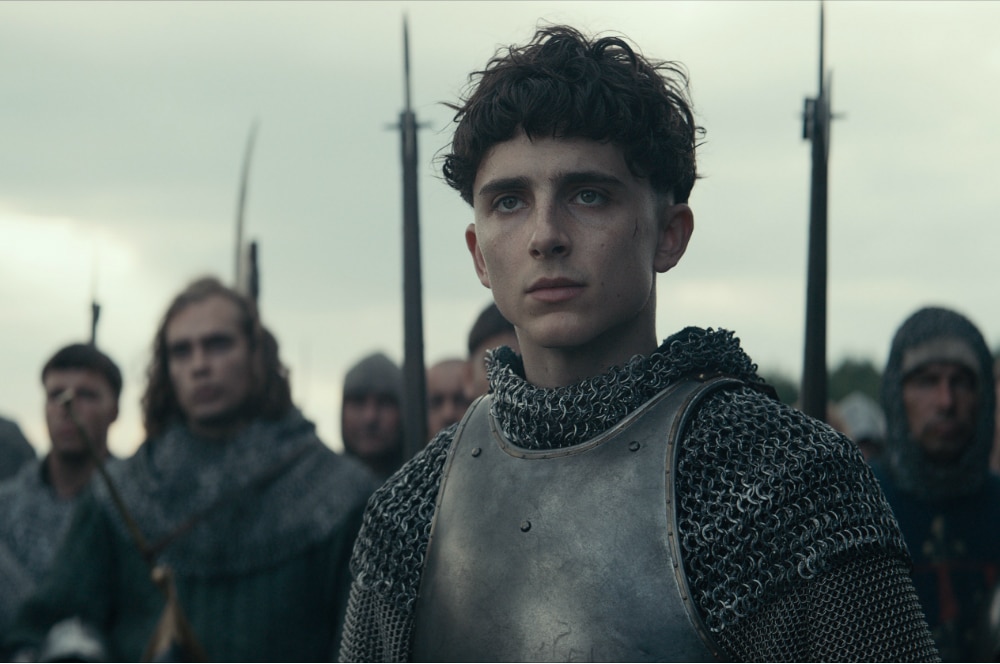 True to Shakespeare’s well-known line “uneasy lies the head that wears a crown,” director David Michôd’s new film The King doesn’t stray far from tradition. Rather than an adaptation of the Bard’s work, however, the film presents a historical retelling of the rise of King Henry V, the young man who would assume the throne, invade France, and achieve relative peace during the Hundred Year’s War. It’s quite a story, but only in that war-for-peace contradiction does the film take flight—and avoid some familiar slog.

Credit to Michôd though, The King‘s elaborate production does indeed capture that medieval spirit. Great detail is paid to costumes and colour, we get to see what it takes to lay siege to a castle, and there’s much debate and discourse in the high court. Beyond that, we watch Hal (a slightly overwhelmed Timothée Chalamet) gradually assume the role of Henry V despite tension with his father (Ben Mendelsohn) and a desire to live an easy life away from bloodshed. That he’s drawn into war is inevitable, especially with the Dauphin of France (Robert Pattinson, really hamming it up) stirring up trouble. With help from Falstaff (Joel Edgerton, just right), Hal becomes Henry on the battlefield and learns what it truly means to be king (it’s an uneasy time!). Much as he did with War Machine, Michôd goes in on exposing how pointless any war really is; except here, due to the nature of his story, he gets to (or has to) show said war. Ironically, it’s the film’s most tedious bit, drawing us away from the emotional core of the narrative. And besides, even with Falstaff chiding that “one is never ready for what awaits,” for most of the film, we are.

That well-established history means there’s no way to spoil the outcome of The King. We know of King Henry V today for a reason, and this is it. So, while Michôd hasn’t quite been able to recapture the magic of his first two films, he’s still clever enough to put a fresh spin on this familiar tale—its blood, guts, and royal decrees would not be enough on their own. That he manages to do so makes his film noteworthy beyond its spectacle. But like young Hal, Michôd shouldn’t necessarily expect applause.