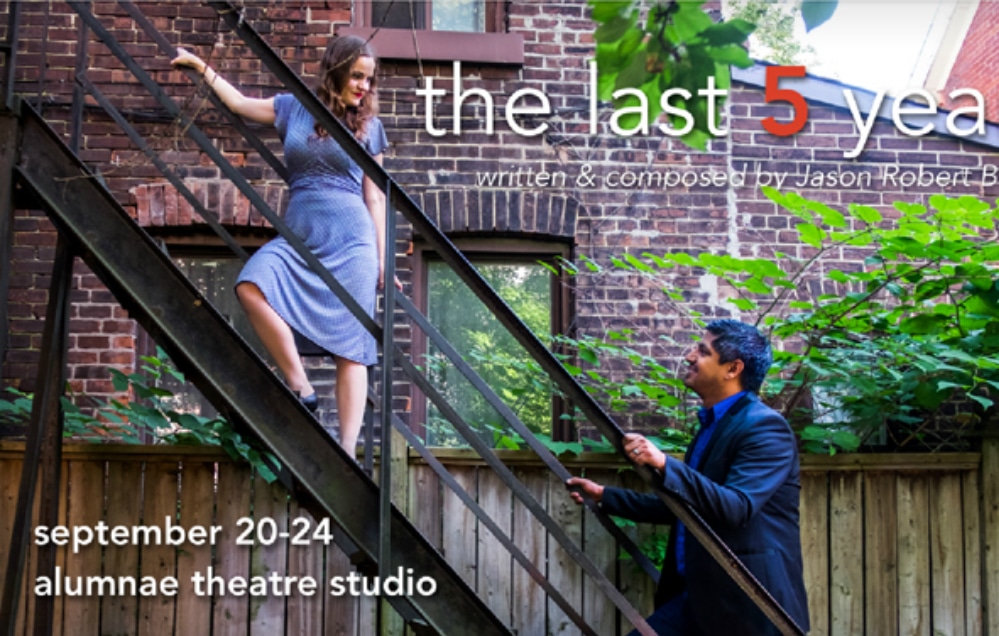 Perhaps the most impressive feat of the Alumnae Theatre’s performance of The Last Five Years by Jason Robert Brown and presented by TheatreHN is the bravery exhibited. The show takes place in one act, with no intermission, with fourteen songs performed (and one solo reading).

This is an incredible feat for the performers: Armand Antony as Jamie Wellerstein and Nicole Marie McCafferty as Cathy Hiatt, but even moreso for the five piece band, led by Carl Jackson on keyboard. As Brown himself is a pianist, the show requires a great lead and Jackson and his orchestra delivered. Jackson seemed to have memorized the entire book and score, and his interplay with his exceptional violinist was astounding.

McCafferty, last seen (by me) in the TO Fringe show Office Hours, plays another vulnerable character, as Cathy is treated quite badly throughout the show. Amazingly, McCafferty is sympathetic without overplaying it, and possesses a great singing voice. Her acting skills will eventually reach her singing ability, as she knocks some difficult numbers out of the park. Faring less successful is Antony, also a producer of the show, whose voice struggles to hit some of the higher registers and his acting is mixed. He does play a very successful swarthy guy, so when his character becomes more successful towards the end of the play, his acting has a sort of lived-in quality that makes for a successful end of the show.

Director Nastazja Palonka makes good use of staging and boxes, which are both props and chairs, and open up to reveal even more props. The show is staged in a way that invites some degree of audience participation, and is breezy, and especially interesting to see an audience that is not familiar with the material, which was a successful musical off and on Broadway, and then became a TIFF hit starring Anna Kendrick and Jeremy Jordan as Cathy and Jamie.

Above all, the company makes great use of the upstairs space, and if the audience closes their eyes, they are transported to the Upper East Side of New York City.

Tickets are still available for the remaining shows of The Last Five Years! For a 20% discount, use the promo code BRIEFTAKE