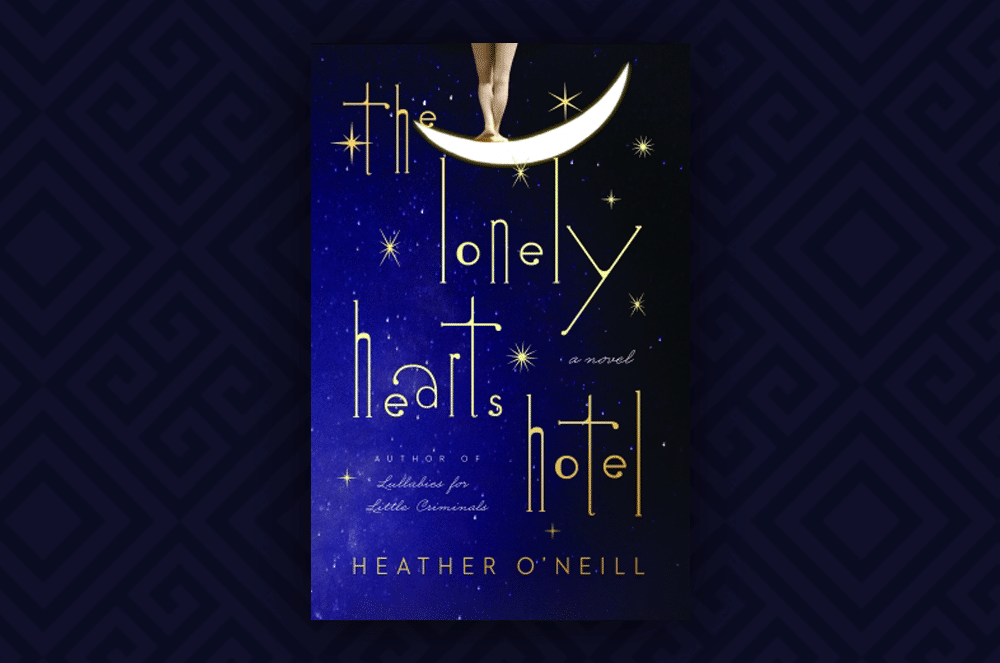 If you’ve read any of her novels, you’re aware of her gift for a clever comparison, in which her characters’ inner lives are described through the actions of alley cats and dirty couches, snowflakes and pianos. The waves of the ocean are described as “a hundred thousand chorus girls raising up their dresses at once”; the sound of rain on rooftop sounds “like young girls sneaking off in stockings to elope”; a vase on the table looks “just like an icicle, a single flower sticking out of it.”

In her third novel, The Lonely Hearts Hotel, O’Neill’s words are loaded with double and triple meanings. The love between the two central characters, Rose and Pierrot, is described as its own language, where “every word they spoke was a metaphor.” Reading through the book, you begin to think the same about O’Neill. There’s a fable-like quality to her writing, even as it touches on incredibly dark subjects like pedophilia, murder, addiction and profound sadness. It feels like there’s a Big Truth in every sentence, an elemental lesson about love and heartbreak, depression, good and evil, childhood, sex, freedom, clowning and art.

The Lonely Hearts Hotel sets a story about two orphans in a Depression-era Montreal where happiness and sadness are seasonal. Rose and Pierrot (both nicknames, because every child in the orphanage is named Marie and Joseph) are both magical, magnetic individuals born into a world that seeks to flatten uniqueness and prepare its children for a life of hard work. Naturally they’re drawn to each other (as are most of the other characters throughout the novel), fated from the first page to fall in love. Rose draws up their plans for world domination – a travelling clown show called “The Snowflake Icicle Extravaganza” – when she’s thirteen, but the two children are separated and kept apart for years as they explore two sides of Montreal (and later New York): the economy-unaffected art collections and drawing rooms of the very rich and the dilapidated brothels and drug dens of the city’s underbelly.

The dandyish Pierrot spends his whole life writing a piano tune, which becomes a symbol of prosperity when it’s finally finished, but he’s out of step during the rough pre-WWII era and struggles to keep himself clean. In parallel, Rose, after ambling through life as a governess, mistress, and actress in early porn films, observes that from the time of her birth she’s never owned her own body. So she grants herself agency through nefarious means. She’s attracted to the criminal element of the city and uses it to escape her own fate as a woman in which “the only time the world shows you any favor, or cuts you any slack, is during that very brief period of courtship where the world is trying to fuck you for the first time.”

There’s an intense richness to O’Neill’s writing that might not be for everyone, but it’s not nearly as heavy as it sounds. It’s a proto-feminist story about crime, art and depression, but it reads like a fairy tale. It begs to be read and reread.

The Lonely Hearts Hotel was provided by HarperCollins in exchange for an honest review. It may be purchased from your friendly independent bookseller or other fine bookstores.

I every time spent my half ann hour to read this web site’s articles everyday along with a cup
of coffee.