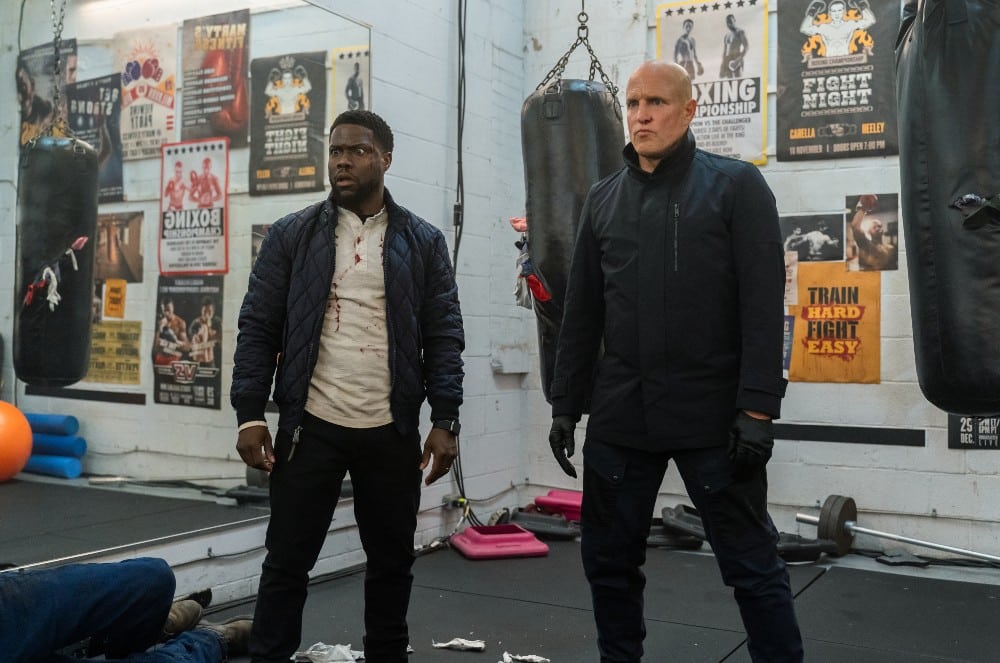 The funniest thing about The Man from Toronto, ostensibly a comedy directed by Patrick Hughes, is that while most of the film is not set in the eponymous city, it was shot in and around the area. Yes, for me, it’s fun to see, say, the Aga Khan Museum dressed up as a Washington D.C. institution—it’s a small thing, but enjoyable. Anyway, it beats listening to Kevin Hart natter on for over 110 minutes.

True to form, Hart plays an annoying gnat of a man, Teddy, who is trying to become a fitness entrepreneur. Foreseeing marital troubles—because he’s a distracted failure—Teddy takes his wife Ruth (Jasmine Mathews) on a weekend retreat to save their relationship; except he arrives at the wrong cabin, gets mistaken for a notorious assassin/torturer, and is suddenly fighting for his life. Enter Woody Harrelson as the titular Man, who exists as a cross between Jason Bourne and, well, Woody Harrelson. Through a series of goofy albeit still overly intricate plot machinations, the pair are forced together in typical buddy movie fashion so they can help each other, crack the case, get the girl, etc. Later, there’s a fight scene in a boxing gym that has a bit of juice; it’s also worth studying Kaley Cuoco’s performance to determine when it was decided she should be added to the film’s cast. OK, I’m stretching. What else can be said about another Hart vehicle in 2022 that hasn’t already been said? With apologies to writers Robbie Fox and Chris Bremner, there’s not much here to recommend.

When the trailer for The Man from Toronto was released, locals were quick to note that everyone was pronouncing the second T in the city’s name. But what of it? No one is supposed to be from Toronto in this film, not even Harrelson. If anything, the mispronunciation speaks to its lackadaisical quality and overall incuriousness. If I didn’t know any better—and didn’t love this city—I’d say everyone involved was slumming it.