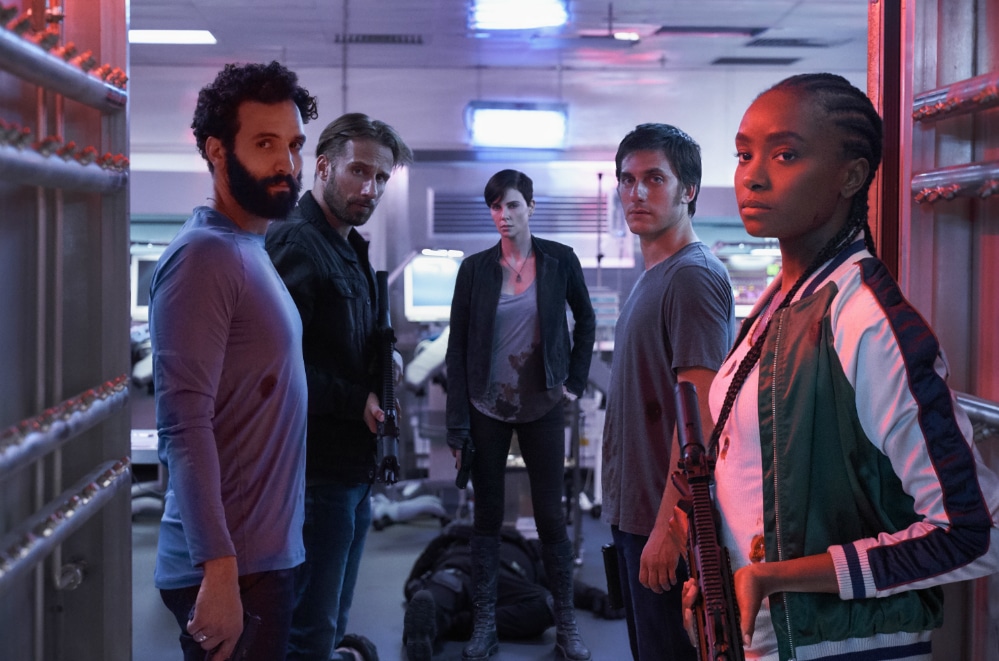 As ideas go, one can do a lot worse than “axe-wielding immortal warrior Charlize Theron.” Using that visual starting point, it’s easy to understand the appeal of director Gina Prince-Bythewood’s film The Old Guard. From writer Greg Rucka (based on his comic), the film centres on a quartet of mercenaries who have existed across centuries, helping humanity by deploying their brand of tactical violence. A cool job, I suppose—if you can get it.

That’s where we enter The Old Guard, with U.S. Marine Nile (KiKi Layne), who’s killed in Afghanistan and awakes later to find herself decidedly not dead. Thanks to her newfound abilities, she meets the whole timeless gang: Andy (Theron), Booker (Matthias Schoenaerts), Joe (Marwen Kenzari), and Nicky (Luca Marinelli)—and sees their skills firsthand. There’s fun to discover here, particularly in Theron’s gritty persona and the surplus of fight scenes. But before Nile (or the rest of the cast) becomes a concern, we’re whisked into the plot, featuring ex-CIA man Copley (Chiwetel Ejiofor) and evil pharmaceutical magnate Merrick (Henry Melling). As you can imagine, the genetic makeup of these warriors is of obvious interest to Big Pharma. In all, the film has just enough to say about the rights and wrongs in play here, while also considering the emotional toll an inability to die would take on a person. It’s also refreshing to see an actress like Layne in the newcomer role (even overshadowed as she is by Theron). The problem is, well, it feels like there should be more.

Again, The Old Guard‘s central conceit is a solid one. But that idea’s execution, thanks to Prince-Bythewood and the limits of Rucka’s imagination, remains small and bland. Yes, there’s cool action here and nods to the extended histories of these characters, but nothing else that really sticks in the mind like Theron and her axe. Meanwhile, at the film’s end, there’s a cheeky (and inevitable) set up for a sequel, which feels like a reach. If you ask me, a network TV series would suffice.