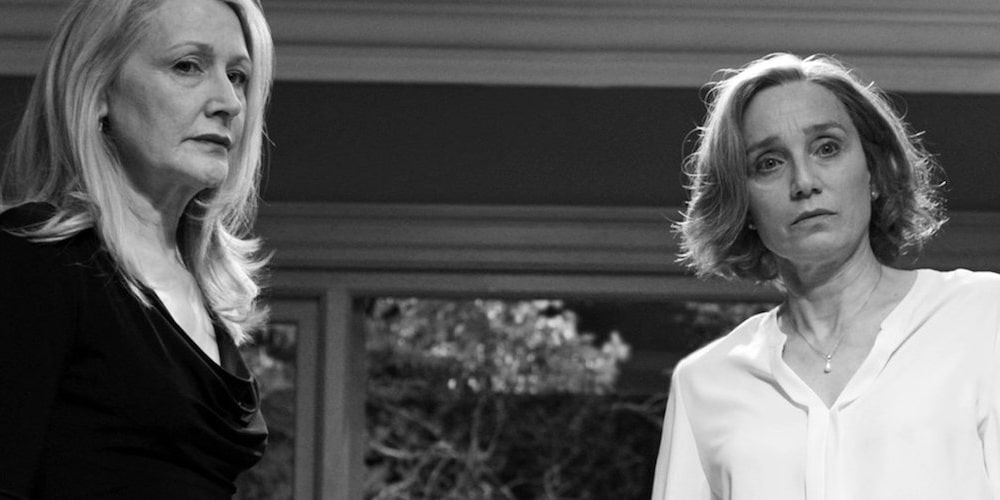 Put enough charismatic actors in a room and it’s hard to avoid making a watchable film. Their talent has a way of making the results halfway compelling. So it is with the newest film from writer/director Sally Potter, The Party. She marshals the considerable skills of some of your favourite actors—including Kristin Scott Thomas, Timothy Spall, Patricia Clarkson, Cillian Murphy, and more—and does indeed put them in a single London flat. That’s something, for sure—but, uh, what exactly?

To wit: Janet (Scott Thomas) has just been appointed health minister in British parliament, but unbeknownst to everyone, her husband Bill (Spall) is terminally ill. That doesn’t stop their friends April (Clarkson), her estranged boyfriend Gottfried (Bruno Ganz), couple Martha and Jinny (Cherry Jones and Emily Mortimer), and Tom (Murphy), representing his wife in-absentia, from gathering to celebrate—and working some other stuff out too. That other stuff, as it happens, is infidelity, pregnancy, and violent revenge. It’s a lot to pack into a movie that just barely cracks the 70 minute mark, but then Potter’s writing has us bouncing effectively from scene to scene, and the actors’ work is, as expected, all top notch—particularly Clarkson as the film’s acerbic cynic. It is indeed hard to sit back and say there’s nothing to like about this film, as it finds room for all these actors, bon mots, and ideas.

It’s that last element though—the film’s ideas—that has me wondering. It’s no coincidence that Janet is in health, and Bill is sick. Or that April is abrasive, while Gottfried speaks only in pleasant cliches. And it shouldn’t be lost on anyone that all of these people are ostensibly liberal, and of a wealthy class—bankers, professors, politicians—put together to cheer on their friend Janet, who vows to remake the country from the comfort of her posh home (even as her personal world crumbles). It’s obvious this is all supposed to add up as an incisive bit of satire. But who is it cutting up? Rich people? The government? The baby boomer generation? These are all ripe targets, sure, but also low-hanging fruit.