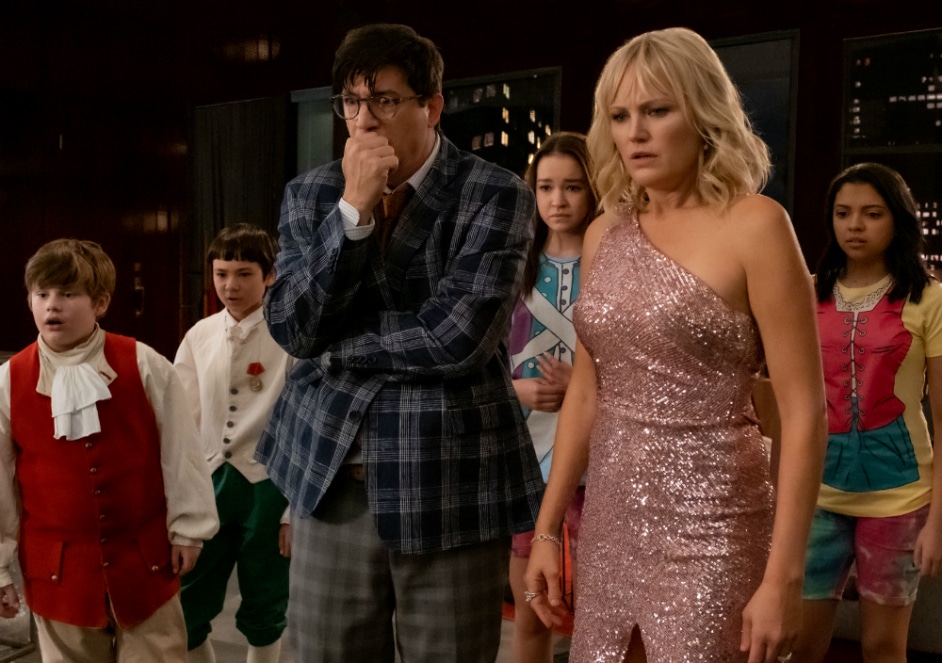 Thank goodness for Ken Marino. He’s not the star of director Trish Sie’s new film The Sleepover, but he is responsible for its biggest laughs. To Sie’s credit, her film has space for many other comedic elements too, designed as it is to appeal to a wide audience. It’s how the film has room for a teen-aged girl trying to find herself, two bored (and manic) young boys, and, uh, a conflict featuring a U.S. Marshal, the witness protection program, and the theft of some crown jewels.

Let me explain. As written by Sarah Rothschild, The Sleepover centres on the Finch family, with Marino as dad Ron along with daughter Clancy (Sadie Stanley) and son Kevin (Maxwell Simkins). Their mother is Margot (Malin Akerman), who, as it turns out, is not entirely who she claims to be. This opens the door on that criminal element and allows Marino the chance to riff on a sudden competition with Joe Manganiello. I’ll leave his role a mystery, despite it being the impetus for everyone’s collective mission to Boston. In all, the film’s narrative becomes predictable from there, including its eventual clunky action scenes, but I’d be lying if I said I didn’t laugh. That’s largely thanks to Marino, who stumbles and bumbles through his part in delightful fashion. Also, since this is a children’s film, a person (under the age of 13) may wring some enjoyment from Simkins’ approach to comedy too. Sie and Rothschild really do leave no stone unturned in that regard.

So then, I’ll just applaud their commitment to the bit. The Sleepover doesn’t reinvent the family comedy, but it does set up a series of jokes while keeping the pace fast enough to sprint enthusiastically towards its punchlines. The more “serious” main plots involving Akerman and Stanley lend the film more weight—and the two actresses carry their parts—but the zingers are the reason to watch. And for this, I add once again: thank goodness for Ken Marino.