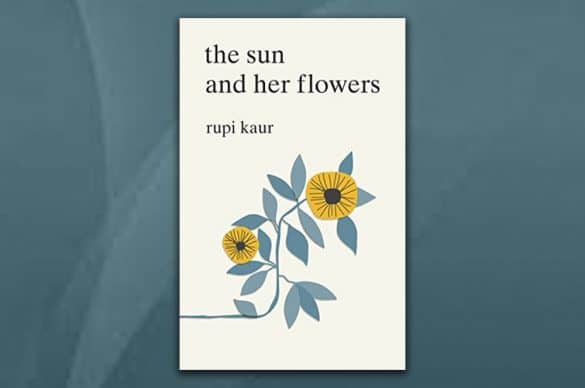 Rupi Kaur’s beautiful book The sun and her flowers is quite surprising.  Billed as a book of poetry, I have to admit, I was expecting something a little more along the lines of a standard poetry anthology. This work is much more revealing, in that it has illustrations, and after a choppy start, the narrative pattern emerges. The metaphor of a flower is present in five sections reflecting the five stages, but the hidden narrative is unique, and once the rhythm develops and the poems become interwoven, the book begins to shine.

The first aspect that was of interest is that Kaur is obviously quite opposed to capital letters, and not one of the poems features a capital, nor does the title of the author’s name. This is a minor characteristic, but one that helped the pattern emerge. I also was surprised to see the title of many of the works listed after the poems, and in some cases, they were revealing in that the poem was supposedly about something and the title changed the meaning significantly.

Again, the flower narrative is well-worn, but especially curious in that the first section shows the author of the poems at her most dismissive of the concept of love. It was like reading the flip-side of the earlier Atticus collection Love Her Wild. But then Kaur slips in a longer poem, which one could argue is a little bit like prose. This is where the author really shines, as the lengthier pieces are full of humanity and quite funny (and a little smutty). The exercise on hand is clearly meant to illustrate that sexuality and expression and representation are natural and normal and the work does an excellent job of showcasing these themes. I bought in relatively early on and breezed through the book, but it stayed with me long afterwards.

The Sun and Her Flowers was provided by Simon & Schuster Canada in exchange for an honest review. It may be purchased from your friendly independent bookseller or other fine bookstores.