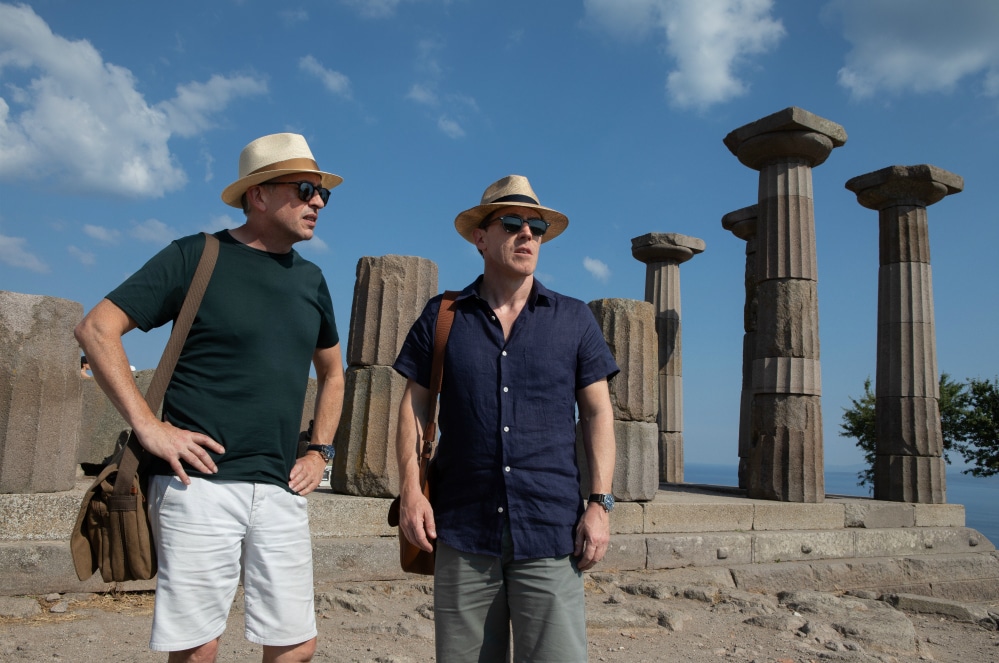 Much like the film’s fancifully plated dishes, it’s enough just to marvel at the construction of The Trip to Greece. As the fourth instalment in the series, directed by Michael Winterbottom, we once again follow Steve Coogan and Rob Brydon, playing versions of themselves, as they travel through their selected country, dining, sightseeing, and, of course, talking. And while this latest film is perhaps the least funny of the bunch, like its meals: we still come away satisfied.

For their latest journey, Coogan and Brydon find themselves in the Greek countryside right from the start. There’s little preamble here; we know how this works. From there, the pair dine together and verbally joust with some of their usual duelling impressions (Mick Jagger, Anthony Hopkins, and Dustin Hoffman make appearances; sadly no Michael Caine). There’s less competition at the table this time around, however, in a nod to the pair’s growth to this point. (We do get a swim race, though; some things never change.) As with their Spanish trip, both Coogan and Brydon appear to have settled into their lives and careers as best they can. This makes for less overt drama—before you ask, yes, Yolanda (Marta Barrio) makes her regularly scheduled appearance—yet the film still gives itself over to anxiety and, for the first time, grief. Like the best recurring series, the weight of the past plays a sizable part in The Trip to Greece. We can absorb the years on Coogan and Brydon, the two men we’ve been watching for a decade now, and reflect on what that time has meant to us too.

In this, The Trip to Greece and the entire series now exist as a singular achievement. If this is indeed the last iteration, its literary theme of returning home, as in Homer’s The Odyssey, is all too fitting. Winterbottom, Coogan, and Brydon can surely rest in peace now considering how they’ve shaped it all together. It may look easy—just eating and hanging out with friends—but like life, we know it’s often harder than that.

The Painter and the Thief Review