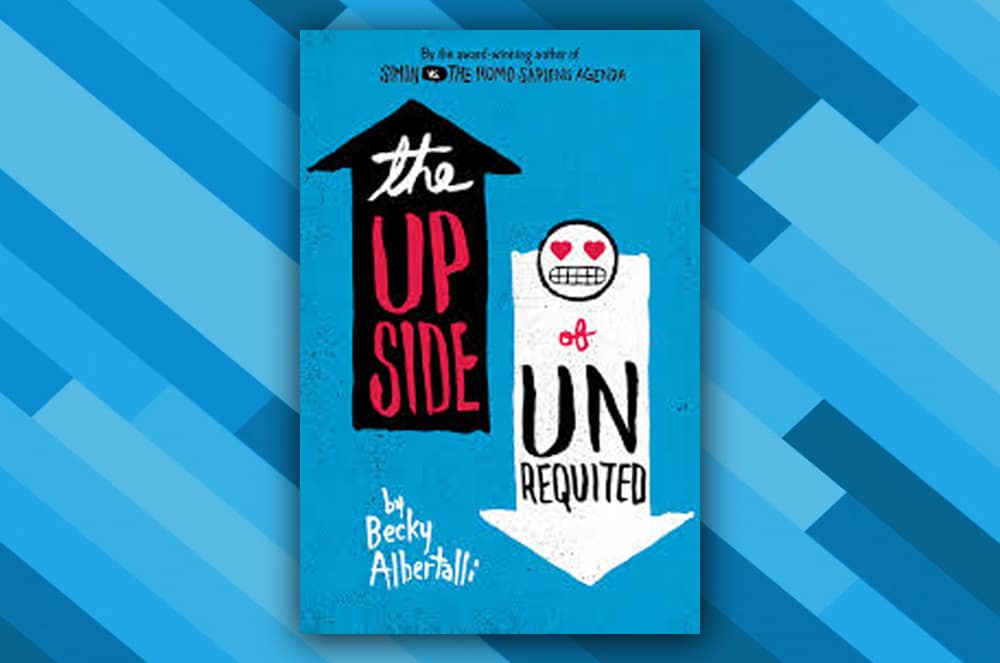 The Upside of Unrequited by Becky Abertalli should get credit for being progressive, as the author bio clearly states that Abertalli is from Atlanta, which isn’t exactly seen as a hotbed for progress. In fact, this idea comes to the forefront in a book featuring an opening scene in which a character meets another in the women’s bathroom, and the scene, while humourous, is seen as a big step forward in its portrayal of language in a teen setting as not being full of shame, (many teen books seem to deploy language as a weapon or to be seen as “alternative”). Abertalli seems to be at home presenting the clear first person voice of a teenage protagonist in a setting in which “giggly” words are used in a straightforward manner.

The book is funny, though the humour doesn’t spring forth from body shame or embarrassment, which does in fact happen to be the literary device employed by Abertalli, one that is perhaps used far too often in books such as this one. However, Abertalli transcends at admittedly low-impact stakes, (finding a partner), and presents a modern, shame-free Young Adult novel.

Molly Peskin-Suso (the hyphenated name is significant), is growing up in the shadow of her twin sister Cassie (the fact that they are twin sisters is also significant), as the “quiet” twin. Cassie is discovering herself and her body, and Molly feels out of place; lumpy, misshapen, a loner and certainly not reciprocated (hence the Unrequited of the book’s title). In the course of the novel, Molly begins to feel more comfortable in her own skin. Abertalli writes with a breezy style, and the pages of the book just flew right by, and there were some pretty funny, pithy jokes.

However, sadly, the characters tended to jumble together, and especially the males, (I don’t even remember which character with which Molly may have had the crush on). The fact that the reader stays within Molly’s head alone may be to the detriment of the novel, as I would have been fascinated to read the perspectives of others, particularly the sister, but also the mothers (the adult characters are supportive, generally).

Clearly what Abertalli is writing is working, as her first book has been optioned into a movie (currently in production starring Jennifer Garner). I am a fan now too (this is my first experience with reading her work), but next time, raise the stakes a little.

The Upside of Unrequited was provided by Harper Collins in exchange for an honest review. It may be purchased from your friendly independent bookseller or other fine bookstores.