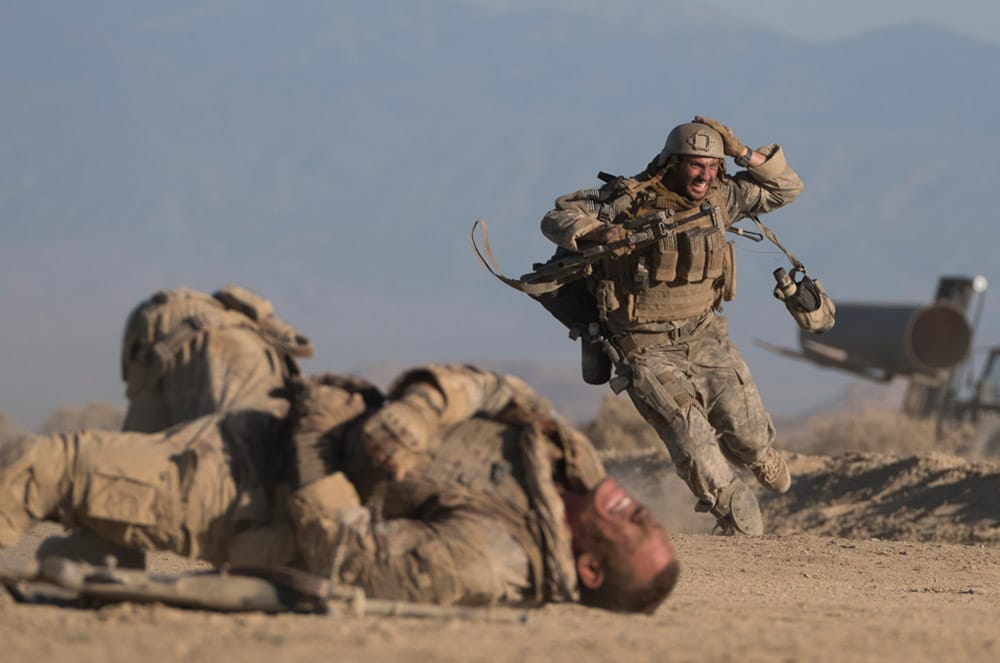 The Wall isn’t so much a film, (although it is a highly gripping one), as it is an intelligent allegory for the war in Iraq.

The premise is simple. Two highly trained American soldiers – Staff Sergeant Shane Matthews (John Cena) and Sergeant Allen Isaac (Aaron Taylor-Johnson)-are sent on a routine military exercise in the scorching hot, desolated expanse of the Iraqi dessert. After lying camouflaged and dormant for hours, surveying the terrain for a hidden sniper who had ambushed a nearby construction crew, Matthews declares that the territory is safe. Tossing aside his cloaked cover, he casually starts walking towards the splayed bodies, only to be shot at by the mysterious, hidden sniper. Quickly running to his aid Isaac is shot as well and takes refuge behind a crumbling brick wall.

From this point forward the film becomes a battle of the wits and physical stamina as the bullet-ridden and dehydrated Isaac communicates via radio to the shrouded assassin. Isaac is dismissive then coldly curious about the Iraqi assailant, as the two volley rapid-fire barbs and then slowly open up to each other about their respective backgrounds. Turns out the sniper (voiced by Laith Nakli) is equally well versed in American weaponry and poetry while Isaac carries guilt for the loss of his fellow American soldiers but none for the legions of losses suffered by the people of Iraq.

Although heavy-handed at times, the script by relative newcomer Dwain Worrell is rich in scope. Using just one barren setting and really just one actor (Taylor-Johnson in a riveting performance), The Wall speaks volumes about the American G.I. Joe attitude, the lack of communication or desire to communicate with the other side (of the figurative wall), whether they be Iraqis or Afghans or Somalis, and how said population are relegated to the figurative trash heap once the American soldiers depart their land.