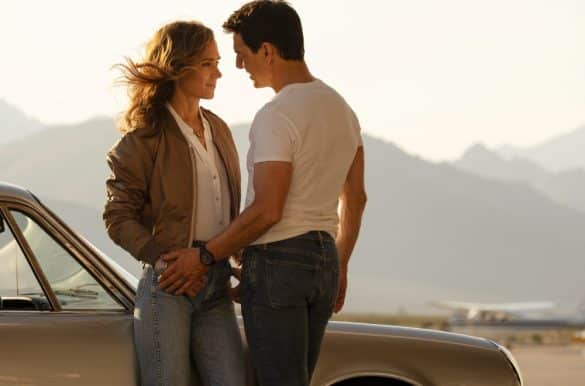 Top Gun: Maverick succeeds because everything about it is defined by and in contrast to Tom Cruise, our last movie star. It all starts with his name above the title, followed by his hand-picked crew—including director Joseph Kosinski and stalwart writer-producer Christopher McQuarrie—and carries on through the film’s narrative, which sees the return of ace pilot Pete “Maverick” Mitchell to active duty, handling business as only he can.

And you know what? That’s OK! Yes, there is no reason to make a nostalgic sequel to a cheesy 1980s action movie; yes, the American war machine jingoism feels insanely out of place today; and yes, Cruise is a deeply weird dude when not in front of a camera (and, sure, while in front of the camera, too). Nevertheless, when the planes in Maverick start roaring, the simple math of big action and bold emotion makes for a satisfying experience. There’s also a story here: Maverick is called back to flight school to prepare its top pilots, including Rooster (Miles Teller), son of the deceased Goose from the first film, for a deadly mission. He also has to stay one step ahead of Navy brass (including Jon Hamm at his sternest). And naturally, there’s the woman who got away, Penny (Jennifer Connelly), who just so happens to be around and available. There’s never any doubt about where the plot is going—but is that really a problem when the film itself knows we know that? Like the planes zooming towards their seemingly impossible objective, the film somehow manages to fly into and out of the uncanny valley unscathed.

Despite its far more structured objective, it’s funny to note once again that the enemy in Maverick is just as anonymous as in the original. This film benefits, however, from defining its real opponent: time itself. And regardless of how intentional any of its choices or themes are—with Maverick forced to rescue his young charges—make no mistake: this movie can get you believing Tom Cruise will indeed defeat the inevitable.