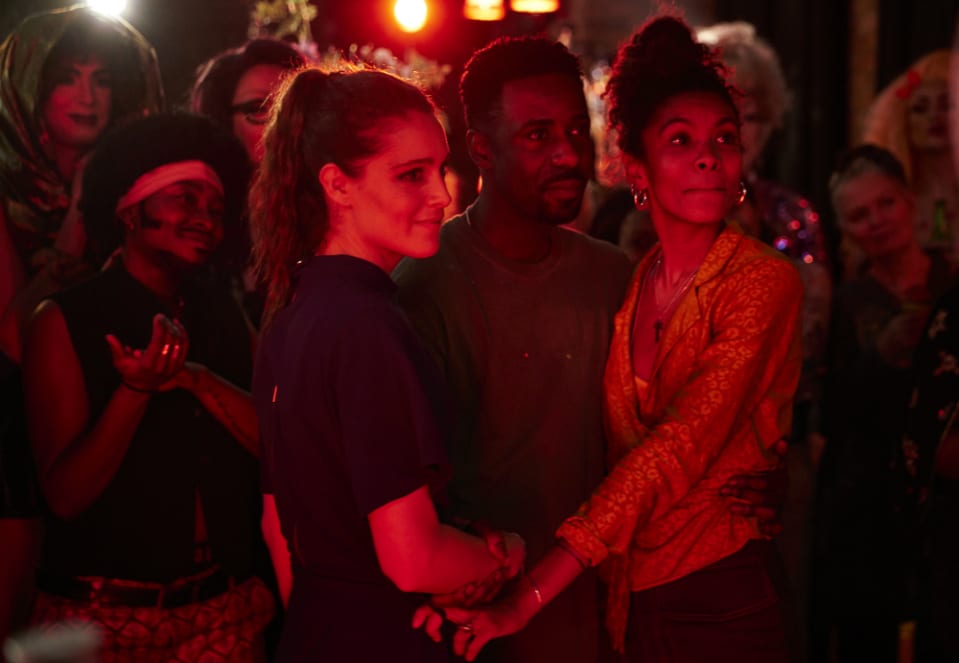 If there’s a reason to watch Trigonometry, a CBC by way of the BBC romantic drama, it’s this: Athina Rachel Tsangari directs the first five of its eight episodes. Working with (and in the shadow of) her lauded countryman Yorgos Lanthimos, Tsangari has crafted singular films of her own, and she deserves more attention and acclaim. While this series is more straightforward than those films—despite the complicated subject matter—it’s clear Tsangari is game to make it work.

Now, that’s not to say there aren’t other reasons to watch Trigonometry. As its title implies, the series is about three people: a couple, Keiran (Gary Carr) and Gemma (Thalissa Teixeira), and their new lodger Ramona (Ariane Labed), out on her own after suffering a head injury while synchronized swimming. It’s a strange beginning for all involved, but Labed, in particular, is more than capable of charm via eccentricity (see: Tsangari’s Attenberg). That allure is needed as both Keiran and Gemma fall in love with Ramona, and vice versa. We’re meant to believe this could happen—and we do—though it’s perhaps more difficult to accept the sequence of other events happening around them. As written by Duncan Macmillan and Effie Woods, the series traverses a wide, wide spectrum of human emotion. Along the way, however, we come to realize what’s best about it: the sense of community (even in conflict) it finds between not just its three leads (all radiant in their roles), but also among the various family members and friends contained within.

In all, Trigonometry can feel like a bit much. That owes at least in part to the show’s tight runtime, but really it’s due to a reliance on overheated drama and an apparent “when it rains, it pours” narrative ethos. Since the show is not just about polyamory, broadening as it does into more than that, we can still appreciate its overall point. And as triangles go, it really does help to have Tsangari on hand to soften and sharpen the angles as needed.