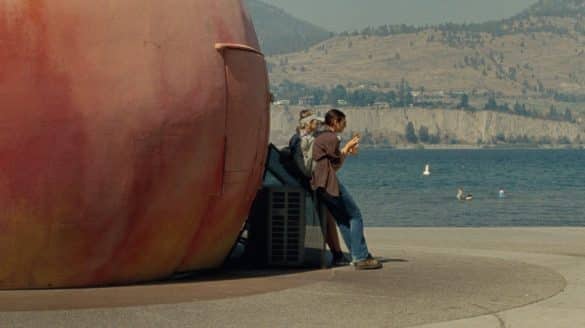 When is a community not a community? Until Branches Bend, the debut feature film from writer-director Sophie Jarvis, is partly shaped by that question as its heroine wakes from the workday trance created by her home in the beautiful Okanagan Valley—and into a local nightmare. There’s something rotten here and it’s not just the discarded peaches.

Robin (Grace Glowicki) works as a grader at the packing plant. Tall and striking in low-cut jeans, she already stands out to her boss (Lochlyn Munro), and that’s before she discovers a mysterious beetle in one of the peaches. Tipped off by Robin, the ensuing investigation—and shutdown of the lucrative harvest—slowly spoils everything in her life, turning neighbours against her and even distancing her from sister Laney (Alexandra Roberts). That’s part of the familiar external plot machinations in Until Branches Bend, the town’s anger superheated in the summer daze captured by the camera. However, what sets the film apart is how Jarvis visualizes Robin’s layered internal drama. Powered by a lived-in and fittingly awkward performance from Glowicki, she’s dealing with more than just the pressures of trying to do the right thing.

So then, what of this community? With a delicate touch, Jarvis twines together the different braids of her chosen town in Until Branches Bend, creating a complex shape worthy of study. The whistleblowing story it tells is not unexpected, nor is its resolution, yet the film’s answers carry more than enough weight.