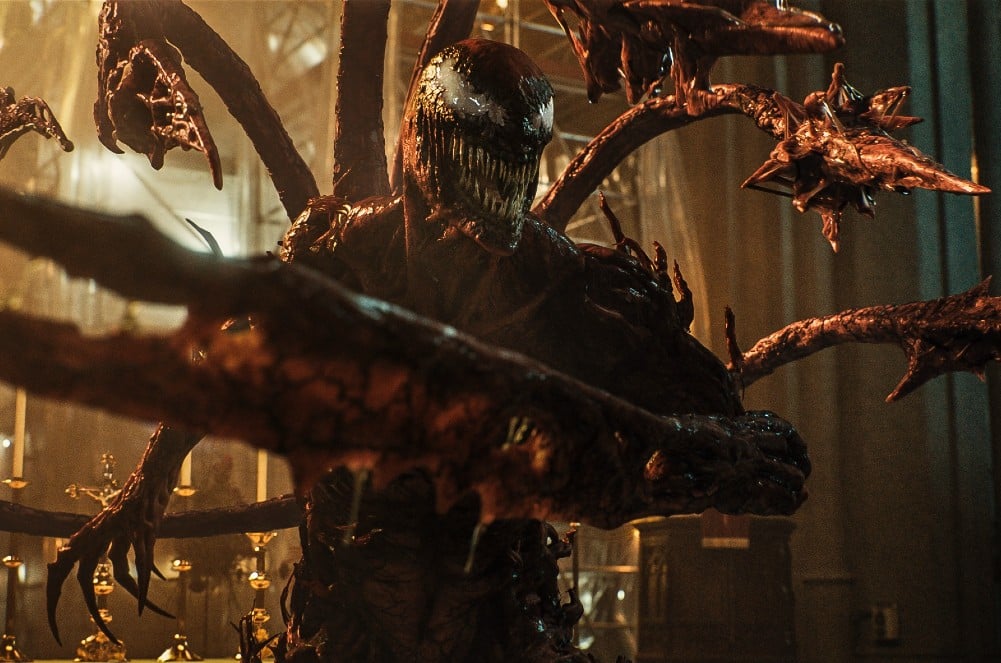 If we’re going to chide every comic book movie for looking and feeling the same, we should be able to enjoy Venom: Let There Be Carnage for attempting something different. Yes, there’s still a mess of CGI fighting in director Andy Serkis’ sequel to the 2018 original. Yet star Tom Hardy remains totally committed to the bit and, unlike most other movies of this type (particularly from Marvel), there’s a sense of ridiculousness here that goes beyond mere quips.

To be clear: Let There Be Carnage is a dumb movie, one that relishes being silly. The film’s highlights revolve around Hardy in his dual role as Eddie Brock, an ostensible journalist, and as the voice of Venom, alien symbiote. While the first film took time to explain all that, this one jumps straight into it, transforming stretches of the story into a romance between the two. Yes, I said romance. The true charms of Serkis’ film, written by Kelly Marcel with a story from Hardy, come when it forgets about Cletus Kasady (Woody Harrelson, with a hard-working wig) and the gothic horror of Carnage, the new symbiote, and just lets its star run wild with himself. Yes, there is a broader plot here involving Kasady, his doomed relationship with Frances (Naomie Harris), and a cop on the hunt, Detective Mulligan (the always welcome Stephen Graham), but it’s best when out of the way. Also, worry not, old favourites from the first film are here too—including Michelle Williams and her wig—all tuned to the same goofy frequency. Maybe this is mild praise but: in all, there are worse ways to spend 90 minutes.

The sin, really, of Let There Be Carnage is one of omission: it could have gone further. There’s the outline here of a hypothetical better version that’s R-rated, directed by, say, Serkis’ pal Peter Jackson circa 1994, that really rips. Hardy’s Venom gives us something absurd—but from within the tried-and-true model of the current marketplace. It’s too bad he couldn’t go all out with the execution.