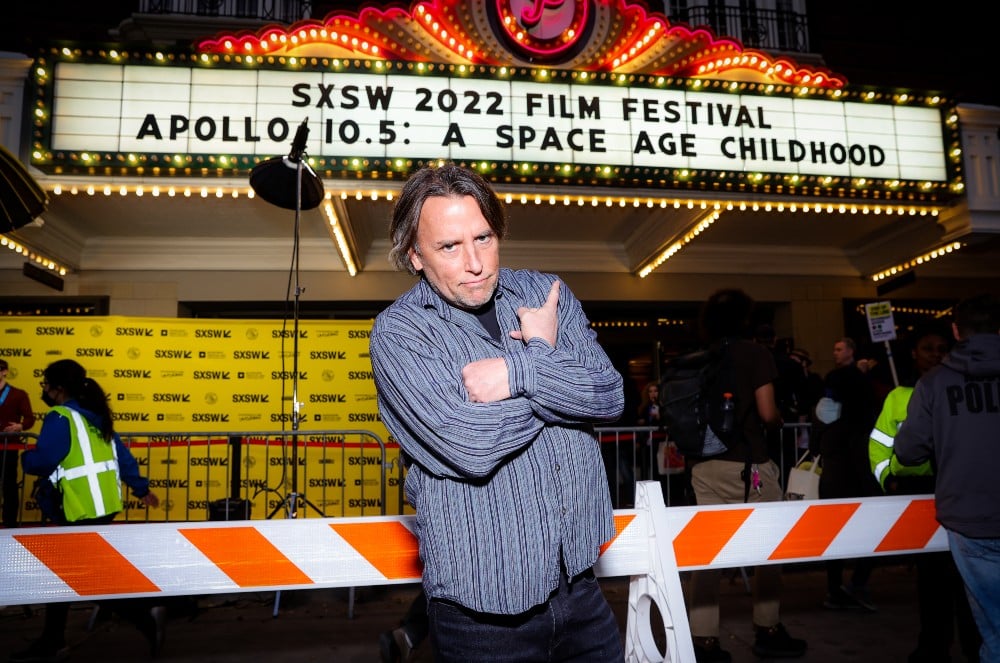 We’ve long had a love affair for the films of Richard Linklater, especially the Before movies: Before Sunrise, Before Sunset and Before Midnight. Therefore, it was a completely natural fit that we would be interested in speaking with the soft-spoken Texan director about his latest film, the nostalgia-dripped, Houston, Texas part recollection, part fantasy rotoscoped film (his first project for Netflix), Apollo 10 1/2: A Space Age Childhood. The film concerns young Stanley (Milo Coy as a child, Jack Black as an adult), who the director insists is not based on himself (he has only two sisters, the fourth-grader in this film has a much larger family), who nevertheless has a childhood in which growing up in Space City, Houston, Texas, he recounts in painstaking detail the TV shows that he watched, the kids games that he played, the type of discipline that was meted out by principals and parents, the food that he ate (it involved a lot of ham), and most importantly, his memories (or fuzzy memories) of watching (and potentially sleeping through) the Apollo 11 Moon Landing in 1969. This is buffeted by a fictional (we are led to believe) mission in which Stanley is recruited for a secret space mission of his own by shadowy figures and NASA officials Bostick and Kranz (Glen Powell and Zachary Levi, hamming it up), and the film plays to a thematic link of many of Linklater’s films, that of nostalgia (not only encompassing the Before movies, but also recent fave Everybody Wants Some!!,  his slight departure Last Flag Flying, Boyhood, of course cult classic Dazed and Confused…). While it was amazing to see that frequent Linklater collaborator Ethan Hawke attended the premiere of this film at SXSW, it is Jack Black, with whom Richard Linklater worked in both School of Rock and Bernie that provides much of the recollection on which this film thrives. Oh and did we mention that for the video junket in which Brief Take was specifically recruited (sort of like in the movie) to participate, Linklater had an actual NASA space suit behind him and that suit was not a replica but actually was worn in space?! The director himself confirmed this to be true. While Apollo 10 1/2: A Space Age Childhood is a beautiful rotoscoped film well worth seeking out on Netflix, we are of course also extremely excited for his collaboration with Beanie Feldstein and Ben Platt, Merrily We Roll Along, which will be intermittently filmed over the course of the next twenty years (!).

Apollo 10½: A Space Age Childhood is now streaming on Netflix