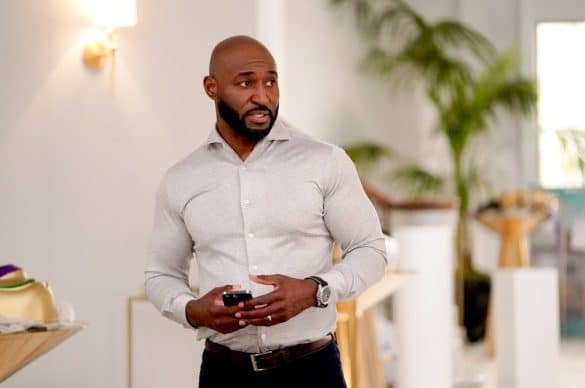 We very much enjoy that formidable actor Adrian Holmes is a Canadian, (technically Welsh-Canadian, but we’re claiming him). We’ve enjoyed his work in such projects as The Cabin in the Woods, 19-2, appearing in Letterkenny, V Wars, Skyscraper, The Boys, and we can’t wait to see him in the upcoming series Star Trek: Strange New Worlds. But more than anything else, immediately from the casting announcement, we are thrilled Holmes is playing the iconic role of Phillip Banks on the Peacock and Showcase series Bel-Air. In fact, Holmes is a a huge reason that we are legitimately hooked on Morgan Cooper’s dramatic reinterpretation of The Fresh Prince of Bel-Air. Holmes not only lights up the screen as a commanding (and buff) Uncle Phil, but also because he features prominently in the episode ‘Yamacraw’ (referring to his brother name at the Black fraternity, Alpha Phi, to which he belongs, as well as his tiny home town in North Carolina). This led him (with the interference of nephew Will) to perform in an extremely memorable synchronized dance sequence, which gave the series throwback Bring It On vibes, but also made clear that this is a show that is not simply paying homage to the O.G. Fresh Prince, but exists in its own right as well. This version of Uncle Phil is an aspiring District Attorney and this series brings viewers into the mansion of Uncle Phil and Aunt Viv in a brand new way. Speaking exclusively to Holmes in a Zoom video interview, the actor revealed that this was his third time being cast opposite Cassandra Freeman (who plays Vivian Banks), the perfect way to flip a flapjack, and what having the blessing of Will Smith means to him.

Click below for more with the wonderful Adrian Holmes of Bel-Air:

New episodes of Bel-Air air Mondays at 9pm ET on Showcase in Canada and are available Thursdays on Peacock in the U.S.