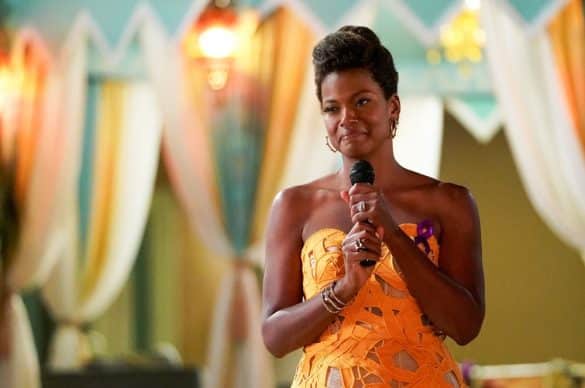 If we attempted to think about the singular 2022 show that sort of snuck up on us and made a tremendous impact, that show would be Morgan Cooper’s dramatic reimagining of The Fresh Prince of Bel-Air, titled Bel-Air. While the series features across the board stellar performances, especially from the ironically named Jabari Banks as Will Smith, Olly Sholotan as Carlton, Coco Jones as social media influencer Hilary Banks, Jimmy Akingbola as the personal assistant/fixer Geoffrey, and of course, Adrian Holmes as formerly aspiring L.A. District Attorney Philip Banks (have we mentioned how much we enjoy the performances on this series?!), there was one actor that stood up above the rest (apologies to the Banks family who each delivered career-best performances). This performer is Cassandra Freeman, presenting a different take on family matriarch Vivian Banks, previously portrayed on The Fresh Prince of Bel-Air by Janet Hubert as well as Daphne Maxwell-Reid. Interestingly, we read that Freeman didn’t attempt to meet with either of the O.G. Aunt Vivs and as such, her performance stands out even more, as a wife, mother, visual artist, philanthropist, and the proverbial rock of the Banks family that Will joins when his life gets flipped, turned upside down. As such, we actively recruited a video interview with Cassandra Freeman, as this immensely talented thespian spoke with Brief Take at the tail end of a busy press day that found Freeman getting to meet Ahmir “Questlove” Thompson. It is abundantly clear that music and musical instruments are crucial to Cassandra Freeman, who spoke to us from her home and mentioned being a recent mother as helping to inspire her performance on the series. New York City-based Freeman actually shared a number of insights into her performance, including shooting the series for more than six months in a protective bubble during COVID and what it meant to have all the players in the fold for the reimagining, including the Fresh Prince himself, producer Will Smith. A surprise twist toward the end of the interview was Freeman discussing her appearance in the seminal (and shocking) Atlanta episode Juneteenth.

Click below for more Bel-Air with the charming Cassandra Freeman:

Season one of Bel-Air is now available to watch on Peacock in the U.S. New episodes of Bel-Air are shown on Mondays at 9pm ET on Showcase in Canada.