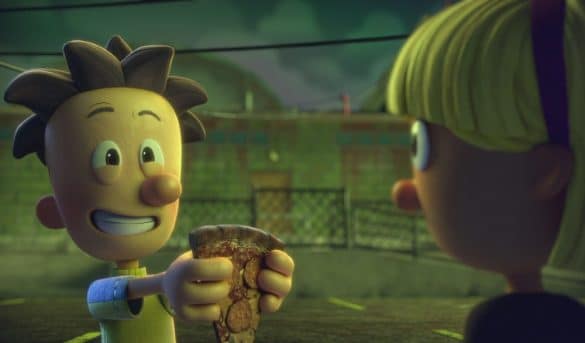 Big Nate‘s Ben Giroux is delightful! We were happy to speak with the peppy voice artist, actor and director on what appears to be some sort of spaceship (or bunk bed), on the recent virtual video press day in advance of the launch of the charming new series Big Nate, a Paramount+ original. Giroux voices the titular Nate in this series based on the comic book and book series by Lincoln Peirce. Brief Take is also a fan of Giroux’s musical homage ‘Back to the 90s’, with comedy partner Jensen Reed. Big Nate is fun for the whole family and carries with it the Nickelodeon name, as well as the full support of now head of Paramount Animation, Ramsey Naito. In addition to Giroux as Nate, the show’s voice cast includes multi-hyphenate Dove Cameron as Nate’s older sister Ellen, and the familiar voice of Rob Delaney as Ben’s father. But we were in the spaceship to talk to Ben Giroux, Big Nate himself, as he discussed the ways in which he’s similar to his character, a noted prankster. Giroux was thrilled to hear the mention of recent co-star Cheri Oteri as a favourite scene partner and singled out Jack Black, a popular choice.

The first eight episodes of Big Nate will be available to stream beginning Thursday, Feb. 17, exclusively on Paramount+ in the U.S., Canada, Latin America and Australia, with more episodes to be announced at a later date.