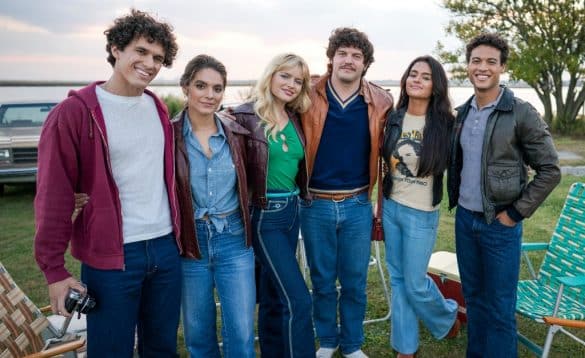 Bridge and Tunnel is a prestige dramedy series from longtime independent filmmaker Ed Burns, who also stars in the early eighties set piece. But one of the most gripping reasons to dive into this powerful show is the performance of its ensemble and particularly the two leads in the show, Aussie Caitlin Stasey (who plays Jill Shore) and American-Greek Sam Vartholomeos (who plays Jimmy Farrell). Shore and Farrell are an on-again off-again artistic couple who essentially come to embody the central theme of the series, which is post-graduation to stay in Long Island and commute into Manhattan (which makes up the title of the series), or to head out of town entirely and experience the world from outside of their childhood bubble.

Ed Burns plays Artie, the dad of the twenty-something Jimmy and is constantly pushing him to get out and explore the world, although he himself has a pretty happy if basic existence within the humdrum Long Island town. And Stasey, a veteran of the world of Burns, having starred in his recent feature Summer Days, Summer Nights, and is also soon to be the featured lead in the Parker Finn horror movie Smile. The chemistry between Stasey and Vartholomeos on the show is fantastic, even as they sort of drift in opposite directions, and during our video junket interview they gushed about working with each other in real life. Vartholomeos discussed the ease of working with the mercurial Stasey, calling her a professional on set and a maniac off of it, (in the best way possible), and how it felt like working with a best friend. Stasey returned the favour by singling out Vartholomeos’ lack of pretensions. In fact, Vartholomeos recounted how Burns actually built in a storyline about Sam and his real life Dad into season two of the Epix series, exemplifying the ways in which reality comes to the forefront in the fictional series.

Above all, the show often feels as though the viewer lives in its world. Click below to watch our video interviews with Isabella Farrell, Jan Luis Castellanos, Gigi Zumbado, Erica Hernandez and Brian Muller, along with Caitlin Stasey and Sam Vartholomeos of Bridge and Tunnel.