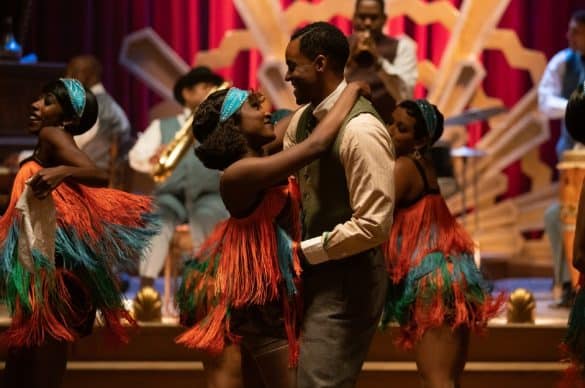 Preparing to speak with the talented all-Black lead cast of the CBC and BET+ series The Porter, before commencing on an exclusive group Zoom video interview, we began by stating that Brief Take had previously come into contact with a couple of these talented cast members. We informed Aml Ameen, executive producer and portrayer of Junior Massey, that we had heard great things about his recent movie Boxing Day, in which he’d starred and directed. Ameen was a great guide to everything The Porter, as the U.K. born and now Los Angeles-based performer appeared to be a tower of influence to the other leads in the groundbreaking series. We next came around to Mouna Traoré, portrayer of Marlene Massey in The Porter. Massey is a Black Cross nurse that becomes influenced by labour politics. She also participates in some incredible interactions with Fay, a Montreal business owner played by the legendary Alfre Woodard. We were thus compelled to ask Traoré about her powerfully charged scenes with Woodard. Next, we came to Loren Lott, known from American Idol, but like co-star Ronnie Rowe Jr., she is soon to be entering the Star Trek universe, as young Ominara in Renegades: Ominara. For The Porter, Lott was able to use her talent as a triple threat; an actress, singer and dancer. You are going to fall especially hard in the series for Canadian performer Olunike Adeliyi’s Miss Queenie, as Adeliyi perfectly embodies this unique underworld character. Lastly, we asked lead Ronnie Rowe Jr. about being the audience conduit as lead Zeke Garrett, a porter on the transcontinental railroad in the 1920’s. Check out more below with these telegenic stars of The Porter.

The all-Black creative team of the CBC and BET+ series The Porter were out in full force on the press day for the buzzed about series, a day that happened to take place at the start of Black History Month. Included on the extremely informative group interview were Executive Producer/Writer/Creator and star, Arnold Pinnock, Executive Producer/Showrunner /Writer/Creator Marsha Greene, Executive Producer/Showrunner/Writer/Creator Annmarie Morais, Executive Producer/Director Charles Officer, and Executive Producer/Director R.T. Thorne. The moving story of how The Porter came into existence is that it was started initially by Pinnock, helping the process into motion, and discussing a Zoom call with Aml Ameen that helped to bring him into the fold as an actor and an executive producer. It was extremely resonant hearing from Marsha Greene, in particular, about the ways in which The Porter developed along the way, finding the correct track, so to speak. And in particular, Charles Officer, who worked alongside actors Olunike Adeliyi and Ronnie Rowe Jr. in the memorable film Akilla’s Escape, tells an extremely memorable story about working again with these two actors along with Mouna Traoré, Loren Lott and the iconic Alfre Woodard, with whom the director had not yet worked. There’s plenty more from the creative team of The Porter below, take a look!

The Porter premieres in Canada beginning Monday, February 21 at 9 p.m. on CBC TV and will be available to stream on CBC Gem, CBC’s streaming service