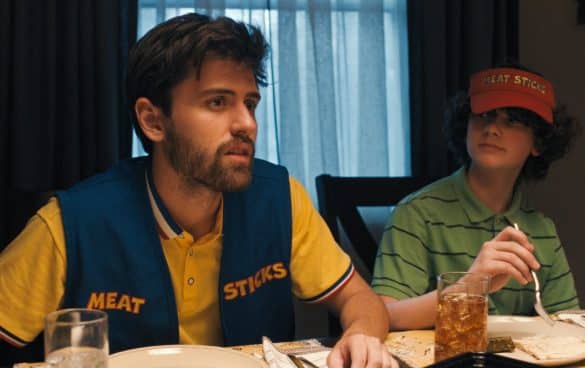 Cooper Raiff, the writer-director-producer of the heavily buzzed about Cha Cha Real Smooth (which was bought by Apple TV+ on the heels of its award-winning showing at the Sundance Film Festival), was set to come to Toronto and discuss the success of the micro-budget movie Shithouse leading into this slightly bigger budgeted Dakota Johnson-starrer (and produced by the multifaceted Johnson as well). But his passport was unable to be produced in time to arrive in the country, so we conducted our video interview virtually. His film is well worth watching about the Bar and Bat Mitzvah circuit, a kismet relationship with an older woman, caring for a child with autism, and though this sounds like the makings of a serious drama, the heartwarming film is certainly not that, it’s a mixture of drama and comedy and slice of life, quite like Apple TV+’s award-winning CODA as well. Raiff’s film has a specific sense of tone, specifically that of leaving college and being uncertain with the direction to take in life, and instead of finding the path, diverting just a little bit to take in the scenery. A benefit of an almost-trip to Toronto is that Raiff was coming right out of screening the film at the recent Tribeca Film Festival. He shared the experience of watching the semi-autobiographical film with his family and what that means to the Texas-based Raiff to be able to do that. Cooper Raiff also shared with us the scene in the film that makes him the proudest (spoiler: it’s definitely not the one that you may think it is if you have watched the film). Raiff also describes his experience of working with the creatively talented Dakota Johnson as co-star and as a passionate producer, a trio of recent films that he has been watching (which definitely don’t place Raiff in a particular type), and which of his previous co-stars he considers to be the “funniest person in the world”. Click below real smooth for more with Cooper Raiff.