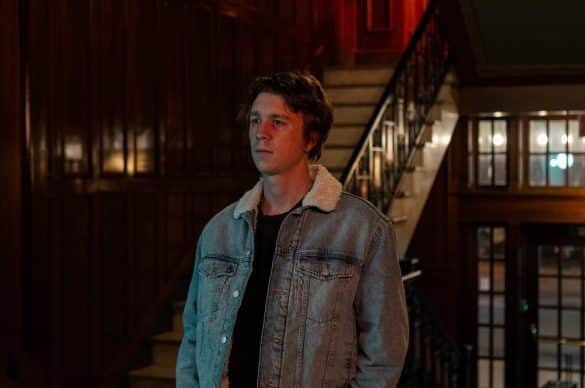 It is amusing to recall the first time that we interviewed the uniquely talented Thomas Mann was for the buzzy film Me and Earl and the Dying Girl way back in 2015 (Mann played the titular ‘Me’ of the title, also known as ‘Greg’). Mann was grouped at the time with Olivia Cooke, the film’s ‘Dying Girl’, and in our recent interview for Adam Sigal’s Chariot, he mentioned that the pair are still in contact, and that she is set to break out in a major way as Alicent Hightower in the upcoming Game of Thrones series House of the Dragon. But we were here to speak with Thomas Mann in support of the Lynchian film Chariot, which also stars one of our faves Rosa Salazar (Mann and Salazar also both voice characters in the upcoming Marcel the Shell with Shoes On). Chariot also stars the legendary John Malkovich as a doctor that can offer up reincarnation and stars Mann as Harrison Hardy, who is undergoing the process of reincarnation, but encounters a bit of a glitch when he reunites with a woman that he happened to know in a previous lifetime (played by Salazar). If the film sounds a bit like Michel Gondry’s Eternal Sunshine of the Spotless Mind and some of Kubrick’s works, then you’re on the right track. However, it’s the first picture for producer Melissa McPhail, a former novelist, it was shot in Little Rock, Arkansas, and feels more like a Lynchian fever dream than anything. Of course, Mann is a refreshing presence in almost everything he stars in, which includes experimental indies like Maine, Netflix’s The Land of Steady Habits opposite Ben Mendelsohn (who Mann singled out as a favourite past collaborator), action fare such as Godzilla vs. Kong with John C. Reilly, or an already airing TV show with Reilly that Mann himself sort of suggested that he is featured in (it definitely is a Winning combination).

Check out more below with Thomas Mann and please do check out his uniquely twisted film Chariot.

Chariot is now playing in theatres, and is available On Demand and Digital