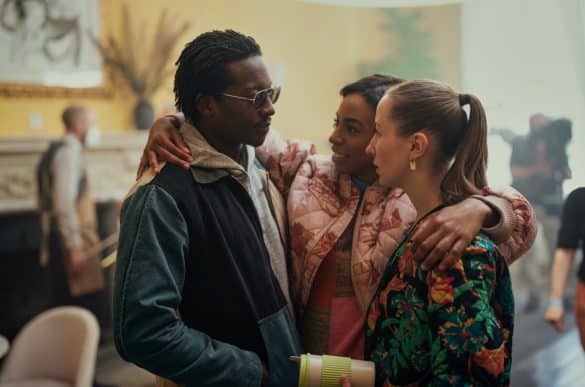 The duo of Brandon Micheal Hall and Pippa Bennett-Warner are standouts on the Prime Video thriller series Chloe. My first observation about this pairing on the virtual video junket day, speaking with Brief Take from the same junket hotel as co-star Erin Doherty, is that they seem to have forged quite the connection (in fact, we noticed them chatting upon entering the room), which is all the more special since Pippa Bennett-Warner’s Livia Fulton and Brandon Michael Hall’s Josh rarely if ever interact in the series. The two of them seem to sort of exist somewhere in the vicinity of the oft manipulative Becky Green (played by the aforementioned series lead Doherty) and are both skeptical of the motives of her character, as she is to them, but separately. As it were, we had a connection to Hall prior, in that he was in the under-appreciated series God Friended Me, (as well as on Search Party), and appears to be extremely friendly, very much unlike the doubting Josh on the show. And in addition, Livia Fulton could come off quite prickly, but her portrayer, Bennett-Warner, whom we have also enjoyed in shows such as Gangs of London and O-T Fagbenle‘s semi-autobiographical Maxxx, is also very warm and welcoming.

Check out more from Brandon Micheal Hall and Pippa Bennett-Warner of Chloe below:

Chloe is now available to watch on Prime Video