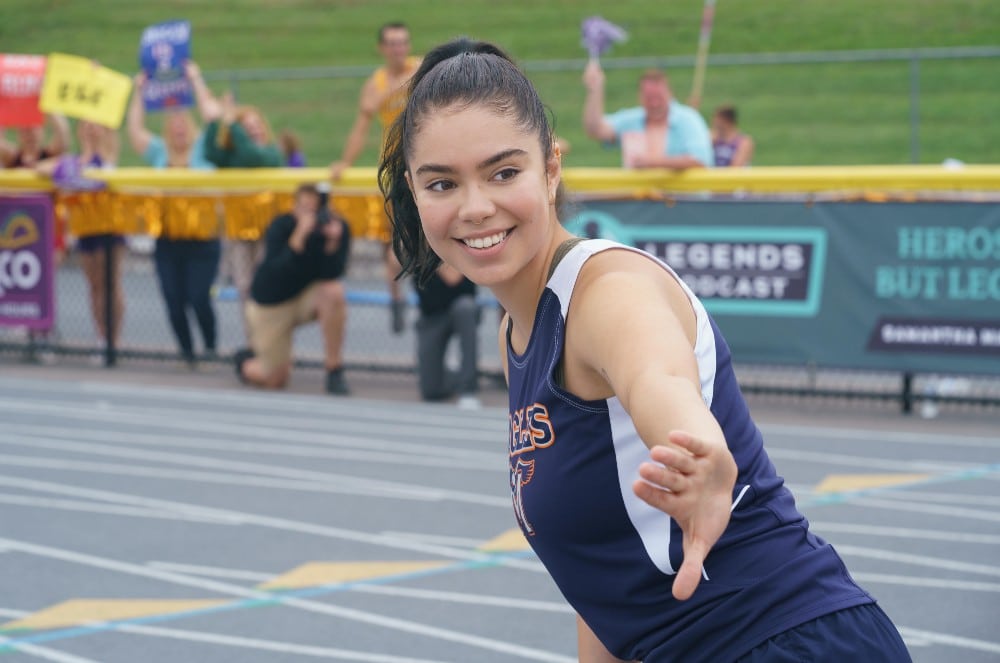 If it’s a video interview with Crush lead Auli’i Cravalho, the Brief Take team is going to be there, whether it’s for Moana, or for her criminally underrated Brett Haley-directed Netflix movie All Together Now, for her musical series Rise, or for the (hopefully upcoming!) Prime Video series The Power (based on Naomi Alderman’s speculative science fiction book), we’re going to have it. Auli’i is sort of our Spirit Animal. Now, if the movie happens to be her first queer rom-com, a movie that is appearing only on Hulu, and from the same studio that released Natalie Morales‘ film Plan B, you know it’s our jam. Crush stars Auli’i as AJ, the older sister of Gabby (Love, Victor‘s Isabella Ferreira). AJ is an outsider and a gifted athlete that is attempting to train Paige (Snowpiercer‘s Rowan Blanchard). The thinking is that becoming a track star will win over Gabby, but the addition of AJ as her expert in the ways of all things track creates a bit of a love triangle and the chemistry between this pair is palpable. Of course, with this being Auli’i Cravalho, we asked about her previous gig as Disney Princess Moana to ask who was her childhood Disney crush, and her answer really surprised us! We also asked when the adaptation of Spring Awakening will be coming out (and fun fact, the musical within the series of Rise was actually Spring Awakening), and Auli’i revealed to us sadly that this was an error (albeit a popular one) on her IMDb page. However, we know that Cravalho is due for an upcoming spring awakening in some capacity, as she is relentlessly hopeful and optimistic and is our queer hero (or as she terms it, a ‘bicon’) after she came out as bi on TikTok to an Eminem and Ed Sheeran song. We were quite moved by her performance in Crush and we know you will be as well.

Crush is available to watch on Hulu on Friday, April 29