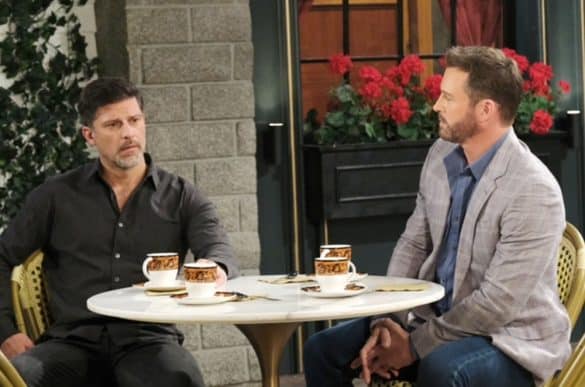 In a slight detour from our usual style of interviews, we sat down one recent afternoon for a candid virtual video chat with actor Greg Vaughan, who we know primarily from daytime dramas and in particular Days of Our Lives. While his ceiling fan whirred behind him, before diving into the daytime drama, it was important that we let Vaughan know that we knew his work from a movie called A Very Country Christmas, also starring Greyson Holt and Bea Santos, along with a really interesting studio called Brain Power, who shoot in and around the Stoufville area. We also told Vaughan that going to visit the set for the series The Wedding Planners was actually our last time to date that we have been on a set (in more than two years now), and then of course, we tried to claim him as a Canadian. On to business! Eric Brady is back on DOOL after some time away from the show, but he actually had returned for a Christmas special in between. The time was indeed now to make his full-time return and Vaughan graciously went into depth about how filming the series has changed in the time of COVID and what that meant for the idea of hanging out with his castmates. Though in this vein, he helped to set the record straight about his sister on the series, the popular Sami Brady, and heaped an awful lot of praise on co-star Alison Sweeney for juggling being a mother and giving so much of herself to the work on DOOL (and how they were initially love interests for a Hallmark movie), returning herself to the series in 2021. He also shared with us how he came to be affiliated with daytime dramas in the first place, that it was actually his grandmother and her obsession with actor Shemar Moore (as it is for many others), that led him down the soap opera path. And of course, we had to ask Vaughan about the fans and he gave a really surprising, revealing answer that was in no way boilerplate. He came across as a very determined and passionate individual and here’s our chat with Eric Brady himself, Greg Vaughn of Days of Our Lives.