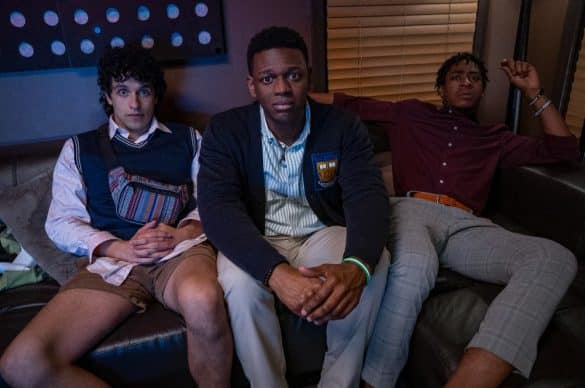 In the astonishingly original film Emergency, what was supposed to be the night of their lives for a trio of university pals instead turns into a night of terror. Yet, unbelievably, with this description, the Carey Williams-directed and KD Davila-written film is surprisingly a dark comedy. Sure, it is a poignant reflection on race and mistaken identity. Yet thanks in large part to the performances from lead actors RJ Cyler (best known for playing Earl in the film Me, Earl and the Dying Girl), Sebastian Chacon (soon to be seen in the highly anticipated Prime Video series Daisy Jones & the Six) and Donald Elise Watkins (a standout of Barry Jenkins’ The Underground Railroad), the film, based on Williams and Davila’s earlier short film, works well as a comedy. Most of all, the film keeps us guessing, as during a night of planned partying, the trio discover a passed out white girl, Emma (Maddie Nichols) in their house and are worried as to what others may think of discovering the scene in question. The decision is made to move the body to another location. Then, wouldn’t you know it, Emma’s concerned sister Maddie (The Hate You Give‘s Sabrina Carpenter) begins frantically searching for her and puts every effort in trailing the group consisting of Cyler (Sean), Chacon (Carlos) and Watkins (Kunle) in this social satire.

We were touched by our video interview with the leads, as we had previously interviewed Cyler for aforementioned Me, Earl and the Dying Girl and recalled that he was said to be able to take a nap at any time (which is still true, his co-stars pointed out). In a touching moment, RJ Cyler mentioned to us that despite Donald Elise Watkins looking like a child (his words, not ours), that he actually happens to be an extremely dedicated father. This revelation surprised us greatly, but seems to jibe with his protective role in the film. As well, Chacon has a singular kind of energy (plus amazing hair and style), and he is someone to watch for, definitely having the making of a future star.