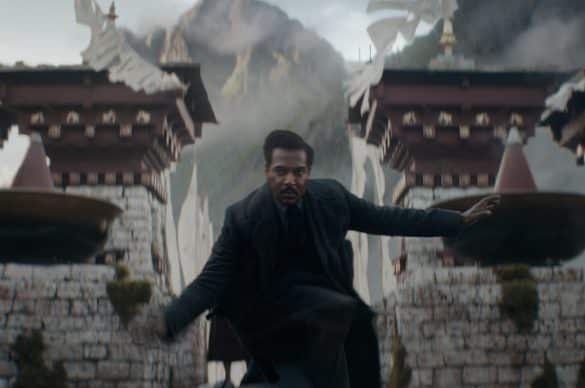 Certain people seem to exude charm effortlessly and we experienced this sense of charisma when we spoke with performer William Nadylam of the upcoming Fantastic Beasts: The Secrets of Dumbledore. While Nadylam was born in Montpelier, France, he revealed to Brief Take he has recently relocated to Brooklyn, New York where he continues to be trilingual, speaking fluent English, French and Italian. Nadylam seems himself to be almost magical, portrays Yusuf Kama in the Wizarding World, a French pure-blood Wizard with Senegalese ancestry. Naturally, we asked Nadylam about being the first character to perform African magic on screen and he immediately answered back that “it’s about time”. This is the kind of rapport that we had with Nadylam, who eloquently previewed what to expect from the new David Yates-directed movie, which is perhaps best experienced in IMAX (Nadylam attended the London premiere of the film, as well as the New York IMAX premiere). In addition to speaking to what changes this film will bring from the previous one in the series, Fantastic Beasts: The Crimes of Grindelwald, we recognized that the last film was an examination of grief for the character of Yusuf. Nadylam pointed out that this film was all about forming new allegiances, especially with Dumbledore (Jude Law) and getting to join in the first incarnation of Dumbledore’s Army, which certainly foreshadows later Harry Potter movies. Nadylam as well provides tremendous insight into how this film contains a compelling villain, the aforementioned Grindelwald, played by Danish actor Mads Mikkelsen, (and, fun fact: Nadylam shared with us that Mikkelsen hosted a Danish premiere of Fantastic Beasts: The Secrets of Dumbledore). Nadylam is a clotheshorse as well, as he displayed tremendous outfits at each premiere, we noticed too that his costumes in this film were quite a departure from those displayed in the previous movie. Of course, this led us to ask Nadylam about working with the legendary costume designer Colleen Atwood, a four-time winner of Best Costume Design at the Oscars, and her team, to ensure that the outfits for Yusuf were reflective of his current state.

Click below for much more with William Nadylam, including his compelling and chaotic audition story.

Fantastic Beasts: The Secrets of Dumbledore is now playing in theatres