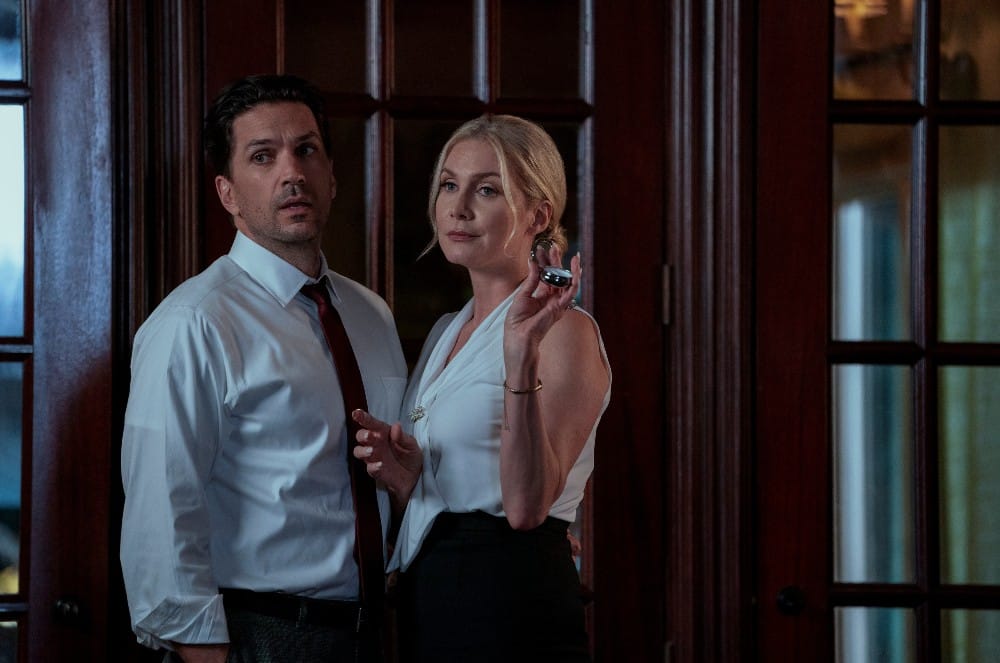 For years people have told us over and over again that Elizabeth Mitchell is the nicest person. We heard about her in our interviews all the time talking about how kind she is and how much of a delight she is, and reader, it is true. Being greeted by my often hard to pronounce given name and told how beautiful I look and how nice my lipstick is by one of the stars of the most buzzed about Netflix series on the planet is not an everyday occurrence. Elizabeth Mitchell brightened my day immediately. Not only is she a standout as Margot, the mother of Juliette (played by Sarah Catherine Hook), but in case you have been living under a rock, Mitchell is also a part of possibly the second most buzzed about Netflix series, that being Outer Banks, as the mysterious Carla Limbrey. In fact, as her virtual setup on the exclusive video junket for First Kill took place possibly inside of a trailer, I am now speculating that Mitchell was on set of the fourth season of the South Carolina-shot show.

During our video interview, Mitchell immediately raved about some of her favourite actors on the show that were present on the junket (Imani Lewis and Sarah Catherine Hook), but also a couple of others that were there in spirit, including Broadway star Aubin Wise, who appears in First Kill as Talia, the mother of Lewis’ Cal, a monster hunter. Mitchell also gushed about her Fairmont family members: Will Swenson, another Broadway star, as her husband; Dylan McNamara, and plenty of praise for Gracie Dzienny as Elinor. In addition, when we asked Mitchell to name a few of her favourite scene partners in the past, she immediately selected known amazing actresses Evangeline Lilly (from the series Lost) and Angelina Jolie (her love interest from the 1998 movie Gia).  Let’s get one thing correct as well, if you haven’t yet seen First Kill (or Outer Banks for that matter), do click on our video interview with Elizabeth Mitchell below, but also get to watching two of the hottest Southern U.S.-shot Netflix dramas around.

Enter for your chance to win advance screening passes to Disney and Pixar’s Lightyear!