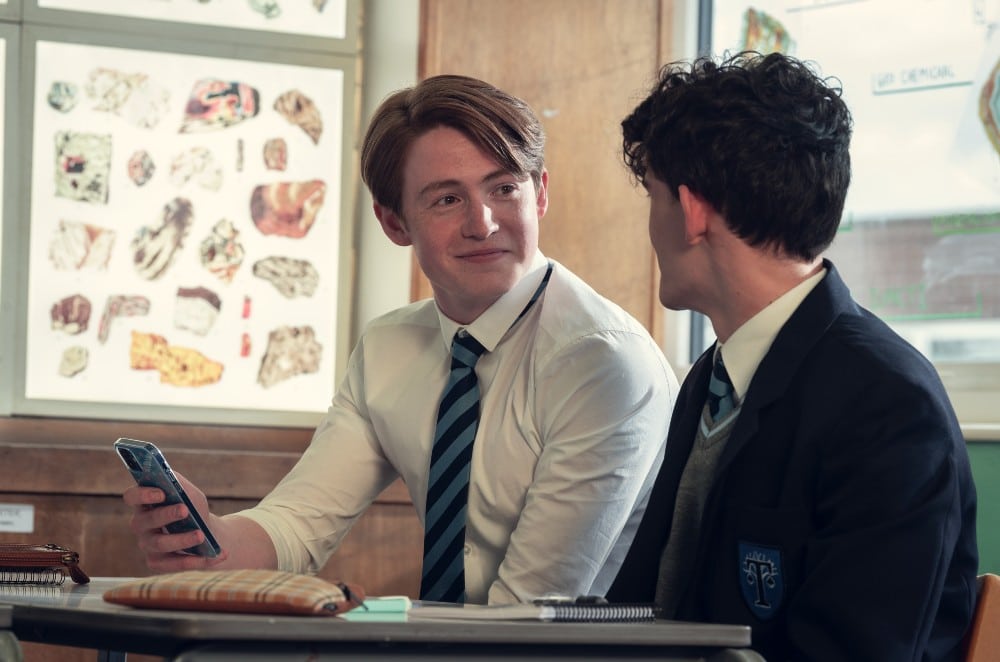 Heartstopper is a magical new series from Netflix that changes our impression of what love can be and places a spotlight on the B in LGBTQIA+. Brief Take was ecstatic to be able to speak with one of the stars of this transcendent series, that being adorable Kit Connor, previously seen in the Dexter Fletcher movie Rocketman, playing a younger Elton John. The babyfaced (and importantly for a series such as this one, in real life 18-year-old) Connor embodies Nick Nelson, a Year 11 (sort of equivalent to Tenth Grade) rugby player and student that is seated next to Charlie Spring (Joe Locke) in his new form class. Most of the action initially takes place from the perspective of Charlie, who was recently outed after being in a relationship with Ben Hope (Sebastian Croft, portrayer of a young Ned Stark in Game of Thrones). What happens next is pretty magical and becomes the majority of the series, based on a Webtoon and series of graphic novels by Alice Oseman, who writes every episode of the show. Charlie develops feelings for Nick, and Charlie, unsure of Nick’s sexuality, decides to go for it anyway. The viewer is given access into Nick Nelson, who heretofore has not expressed any feelings toward boys, and is touching in its depiction of a first love in which one partner is figuring things out. In fact, when we spoke with Connor a couple of days prior to the series release, the actor, speaking from his home in London, knew that fans of the graphic novel were eagerly anticipating the show’s imminent debut. However, Connor probably didn’t anticipate that Heartstopper would trend higher than any other show on Twitter by far. It is clear that the fans of Heartstopper are obsessed with the show and unbelievably, Kit Connor actually first auditioned for the role of Charlie. Luckily, he was a better match for Nick Nelson, and fans worldwide appear to feel the same way. The dreamy series has an epic soundtrack led by British artist Baby Queen and Connor described the importance to him of the soundtrack, why LGBTQIA+ representation is essential, and how Heartstopper is quintessentially British. Oh and Kit Connor freshly turned 18 and is a star that you will hear about for years to come.

Click below for much more with the Nick Nelson of Heartstopper, Kit Connor, the breakout of the year.

Heartstopper is now streaming on Netflix