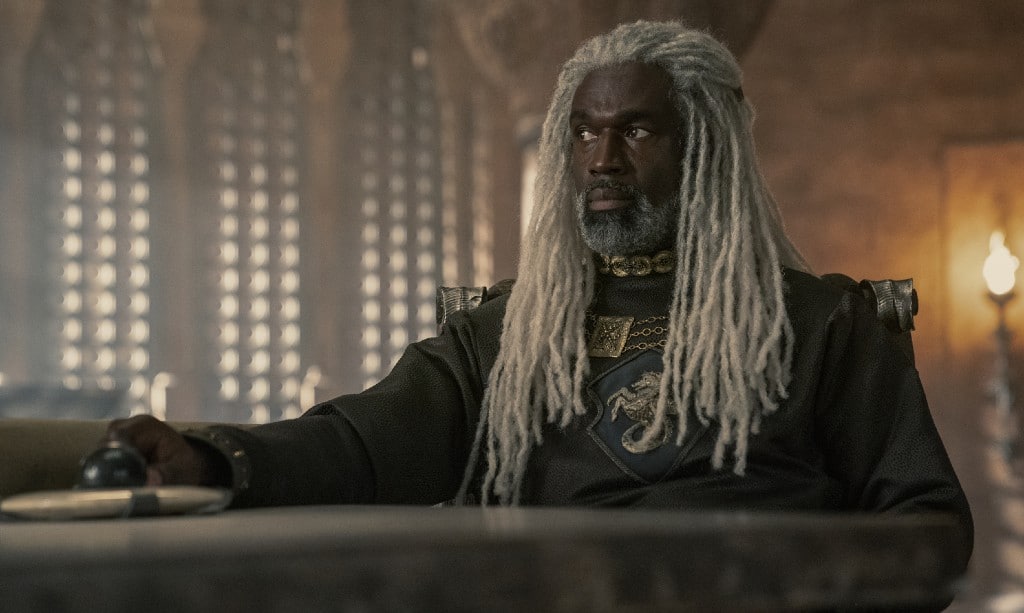 Having been major Game of Thrones fans of the series from season one, episode one, (yes, we said it, but it so happens to be fact), we could not be more excited for the prequel House of the Dragon, from Ryan J. Condal and George R.R. Martin (!) to premiere this year, as it has been a long wait from Game of Thrones. What’s more is that this series focuses on a single warring family, that being the Targaryens (the titular House of the Dragon), one that is represented by Fire and Blood and we imagine will make for a fascinating series.

In fact, we can more than imagine, having watched the first six episodes of this fiery and bloody series in anticipation of speaking with Lord Corlys Velaryon, who is portrayed in the series by British Barbadian actor Steve Toussaint. Remember what we said before about one warring family, as despite being a Velaryon and not a Targaryen, Corlys is very much entangled with the Targaryens. For starters, the Targaryens are from Valyria (like Valryian Steel, which is far more present at this time) and Corlys being from House Velaryon is by no means a coincidence. Furthermore, Corlys is the husband of Princess Rhaenys Targaryen (Eve Best), and even more than that, is on the Small Council, which means that he is extremely close to the king, (or perhaps at odds with him), Viserys Targaryen, played by Paddy Considine. Known as the Sea Snake, Corlys Velaryon is a Lord of the Tides and the Master of Driftmark. His portrayer, Steve Toussaint, also happens to be extremely charismatic and we could instantly see how he is perfect for the role.

Speaking virtually with Brief Take as the first outlet of the day from the Crave offices in Downtown Toronto, (later that day, Toussaint threw out the first pitch at the Blue Jays game), he shared with us all things House of the Dragon and Lord Corlys Velaryon. He discussed working with co-stars Considine, Best, and also Matt Smith (who plays Daemon Targaryen), and Rhys Ifans, who also sits on the small council as the Hand of the King, Otto Hightower. Remarkably, Toussaint compares House of the Dragon to another one of his projects, Prince of Persia: The Sands of Time in terms of featuring massive production design and effects.


New episodes of House of the Dragon air Sundays at 9pm on Crave in Canada and on HBO in the U.S.