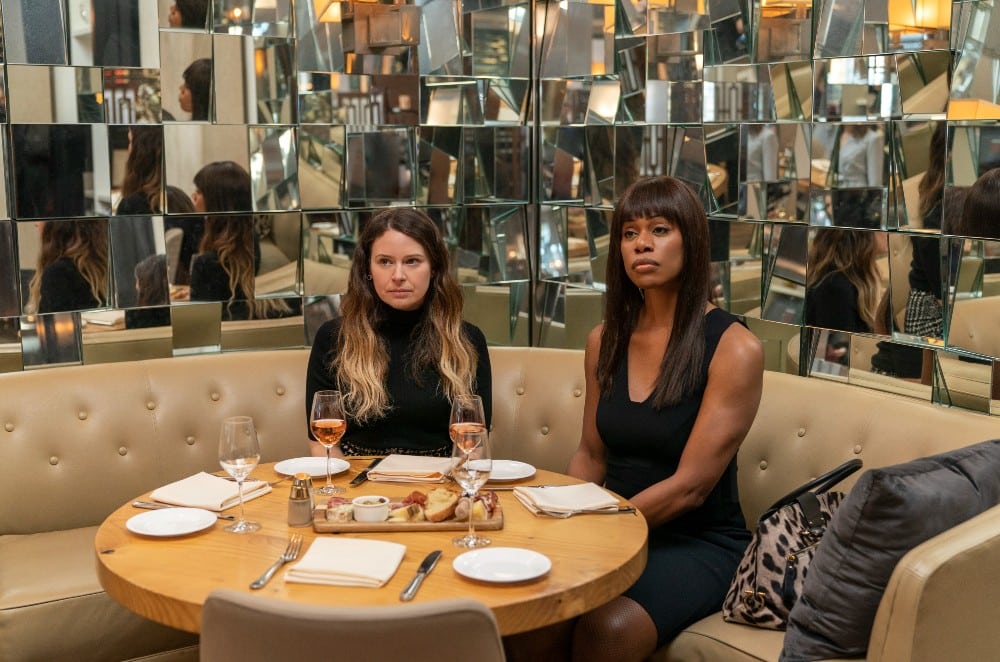 Inventing Anna‘s Laverne Cox (who previous played Sophia on Netflix’s Orange is the New Black) as well as Katie Lowes, a veteran of Shondaland who starred in Scandal, play a couple of friends on the new series. But this description is not quite as apt as the fact that both of them come into the destructive orbit of the manipulative Anna Delvey née Sorokin (Julia Garner), and the pair. along with Delvey and platonic pal Noah (Chris Lowell) travel to Marrakesh on what ends up being a pivotal life-changing sequence in the tense limited series. As this is a big budget series, the foursome really did go to Marrakesh in real life and the drama that ensues on the show involves Delvey not having nearly enough money to pay for the supposedly all-expenses paid trip to the Moroccan city. No problem, as Rachel, Lowes’ character, offers to foot the bill on her company credit card for her employer, Vanity Fair. She does so strongly against the wishes of Laverne Cox’s personal fitness trainer character Kacy Duke, as the fallout of the trip leads to a massive shift in all of their lives. As Brief Take shared to Cox and Lowes on the video junket for Inventing Anna how much anxiety these scenes had caused, the pair repeated back how much they were deeply felt as well. In fact, for the remainder of the interview Cox pointed out how wonderful it was that Lowes was able to take her real-life son Albee on the trip with her and Lowes confided in us how incredible Shonda Rhimes is as an employer to allow her to work around her pregnancy. The stark contrast of Cox and Lowes sharing the ease of working around a shoot also interrupted by a pandemic with the strain caused to them by Julia Garner’s Anna Delvey on the show illustrated one of the main points of the series in detail. Look below for more with Laverne Cox and Katie Lowes of riveting series Inventing Anna.