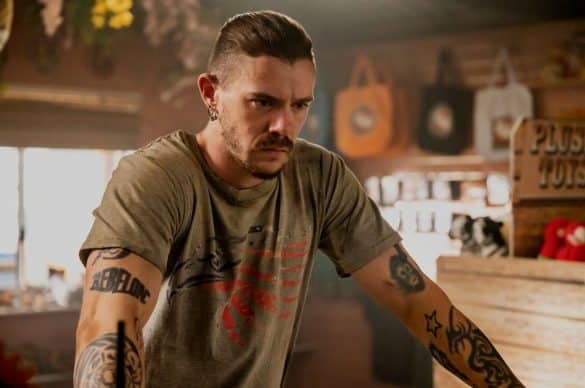 Speaking with Brief Take exclusively on the virtual video junket for Joe vs. Carole, it is clear that actor Sam Keeley, in his melodious Irish lilt, understands and stresses the importance of humanizing his character John Finlay. Although we may be inclined to consider that these are cartoon characters (because who among us hasn’t watched the Netflix docu-series Tiger King?!, although the Peacock show is based on the Wondery Over My Dead Body podcast). You might remember John Finlay as the lover (and quasi husband) of Joe Exotic, played here with awesome sincerity by the multi-talented John Cameron Mitchell. One thing that stood out for many people was that John Finlay had many missing teeth (as well as a…let’s say ‘interesting’ hairstyle). One of the balancing acts of Joe vs. Carole was, yes, to show these characters as larger-than-life and often times bizarre, as this hillbilly soap opera involving massive jungle beasts is certainly a major aspect of this tale. But as Keeley constantly reminded us, and at the heart of the series (that Brief Take has very much enjoyed), is that these are in fact real people, and that Keeley is doing justice to a still living person. Of course, Keeley spoke effusively about series lead John Cameron Mitchell, as well as a seemingly out of left field performance by Kate McKinnon as Carole Baskin. But he also focuses on later scenes with Joe Exotic’s other husband, Travis Maldonado, played here with surprising aplomb by Nat Wolff. Some of those scenes, with the ambitious Wolff as Maldonado opposite Keeley as the comparatively more grounded Finlay, have considerable bite. Keeley spoke extremely fondly of the many month Australian shoot for this lovingly rendered series. See more with Sam Keeley of Joe vs. Carole below!