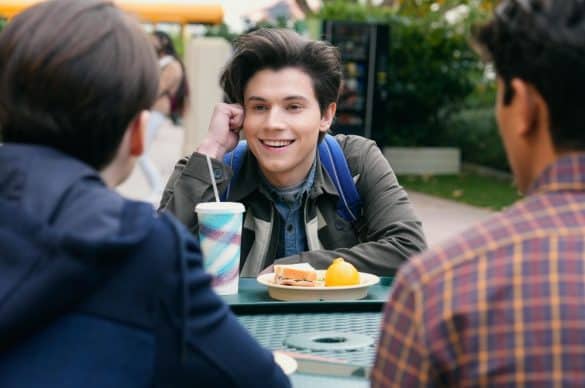 If you follow a series as closely as we do, you tend to see that by the third season, (in this case, the final one), that you have a firm grasp of the characters on the show. Some stay the same, others diminish slightly, but it takes an actual long term plan to have a role grow as much as Anthony Turpel‘s Felix on the criminally underrated Hulu series Love, Victor. When the show started back in 2020, Turpel was memorable as Felix Weston, the wisecracking best friend and neighbour of the series lead Victor (played capably by Michael Cimino). But as the series began to reveal that it was more than a teen show about a queer boy, the arc of Felix is that he began to date popular girl Lake (Bebe Wood), then they broke up and tried to remain friends in more than name only, then he discovered he had a crush on Victor’s younger sister Pilar, played by Brief Take favourite Isabella Ferreira. Then we come to see that Felix is in part so often at the apartment of the Salazar family as he has difficulty taking care of his mother, played by Breaking Bad‘s (and The Valet’s) Betsy Brandt. Finally, although the above all seemed to sound mighty serious, to balance the tones with a mix of comedy and drama was a Felix speciality. He really experienced more growth than maybe any other character on the series (and also, his popular Shawn Mendes-esque hairdo grew).

We requested a repeat engagement to speak with Felix’s portrayer, actor Anthony Turpel, who sat down with us upon the series coming to an end and reflected on wonderful moments from the past season and the series as a whole. Then we had Turpel show off his adorable dog, who was lurking nearby for our entire video interview.

All three seasons of Love, Victor are now available to watch on Disney+

Win advance screening passes to Paws of Fury: The Legend of Hank!