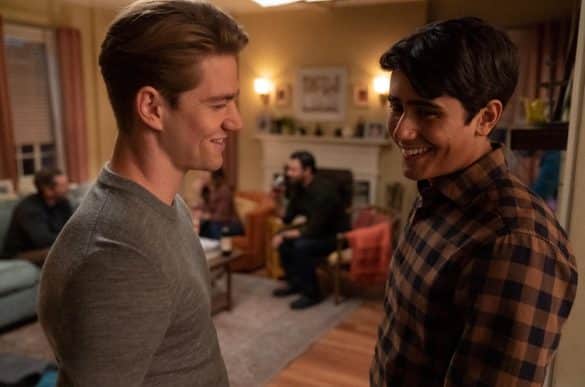 When we explored the possibility of speaking to Nico Greetham for his arc as Nick, the love interest to Victor (Michael Cimino) in Love, Victor, we didn’t realize that not only would it happen, but also that Greetham, who happened to be in an overseas country at the time, would also be speaking to Brief Take about his roles on American Horror Story, American Horror Stories, The Prom, and his much buzzed about return to American Horror Stories. Greetham surprised right away by sharing that he received news of his Love, Victor part on a tip at a gathering at the house of fellow performer on the series, Rachel Hilson. Of course, this was before he got cast, so he went through the usual channels and auditioned, but it was cool to see that he knew the portrayer of Mia Brooks on the series beforehand. Greetham shared with us a ton of thoughts on the series, from his introduction to working with Michael Cimino, to whether or not he was happy with the ending for his character on the series, if he happens to be a “U Up” kind of person like Nick, what a potential Nick spinoff would be called, the list goes on. Please explore Love, Victor and then dive into our in-depth one-on-one video interview with the portrayer of Nick in the series, the fantastic Nico Greetham.

All three seasons of Love, Victor are now available to watch on Disney+