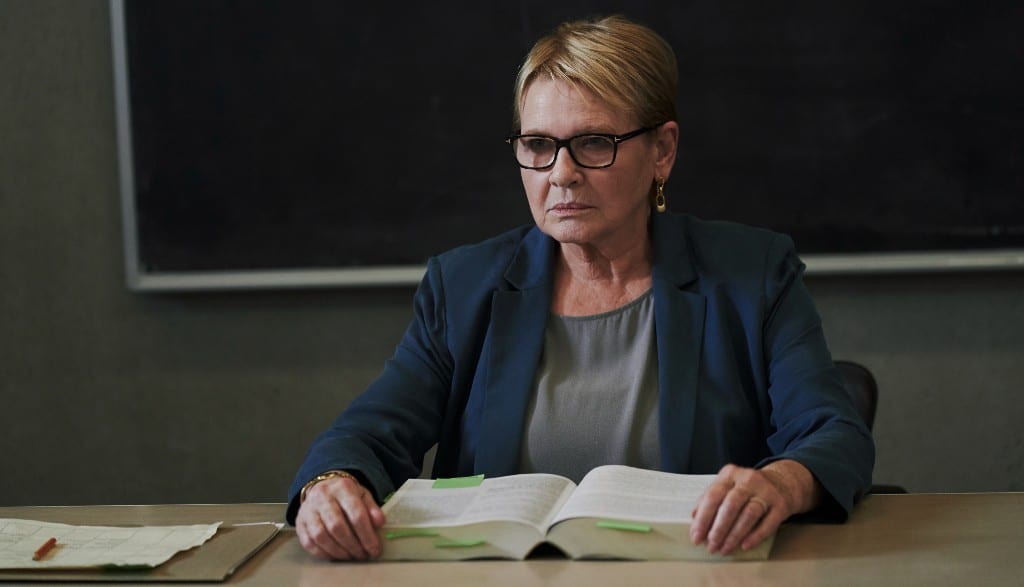 Legendary actress Dianne Wiest has always been a favourite of ours. She has appeared in such varied projects as Mike Nichols and Elaine May’s The Birdcage, in which she appeared as the wife of an ultra-conservative senator; as well as in the criminally under-seen Five Nights in Maine from director Maris Curran, in John Cameron Mitchell’s adaptation of Rabbit Hole, the recent Rosemund Pike caper film I Care a Lot, as well as the therapist to Gabriel Byrne’s therapist on In Treatment, recipient of multiple Oscars and Emmys….we could go on. For our Zoom video interview, we discussed Wiest’s role in the Paramount+ crime thriller Mayor of Kingstown (shot in and around Kingston, Ontario), from the Midas touch creator Taylor Sheridan (the show is also co-created by Canadian actor / musician Hugh Dillon).

On the captivating series, Wiest is Miriam McLusky, the at times disapproving mother to Jeremy Renner’s Mike McLusky, as well as to Taylor Handley’s Kyle and departed Mitch McLusky (Kyle Chandler), who shockingly dies in the first episode of the series. Set in Detroit, the series is a look at the ‘Mayor’ of Kingstown, as the Mayor is the prison warden, who has become Renner’s Mike after the aforementioned death of Mitch in episode one. In the course of the inaugural season of the renewed series, Mike was once an inmate in Kingstown, but now has become the executor of law and order in an at times lawless place. Wiest’s Miriam is a former college professor who in Kingstown is a teacher to the female inmates.

In our video interview with Wiest, the actress described what inspired her to join the series, which is that she is an advocate for prisoner reform and as such, has a deep interest in the American prison system. Wiest also shared with us some of the memorable scenes of shooting the white knuckle drama.

Mayor of Kingstown season one is now available on DVD