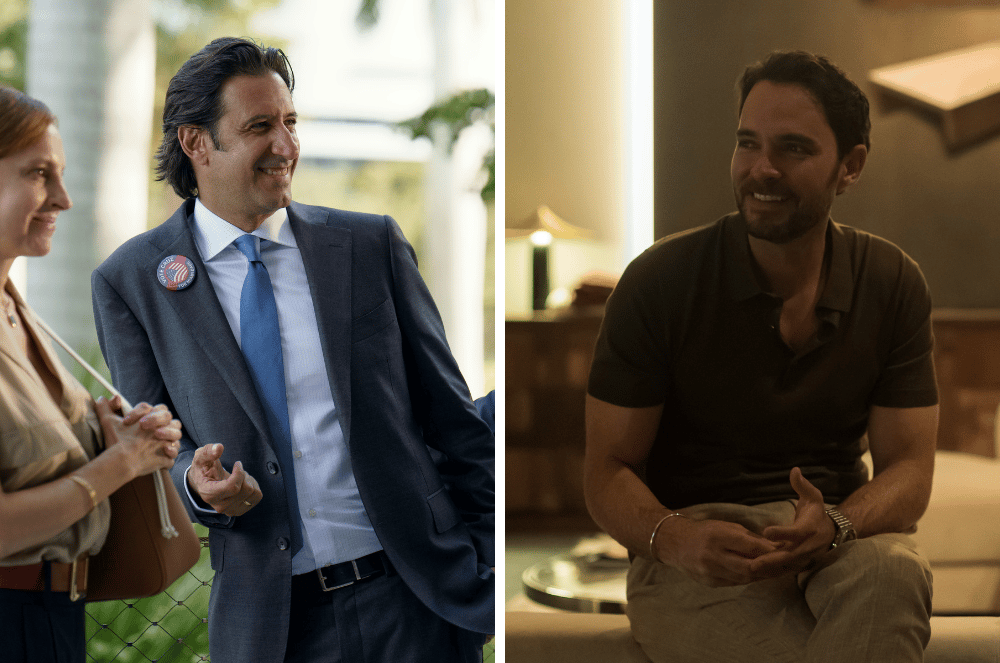 We had a certain familiarity with Mexican actor José María Yazpik (affectionately known as ‘Chema’), primarily from Narcos and Narcos: Mexico, as well as Colombian actor Manolo Cardona, most widely known from playing lead Alex Guzmán in Who Killed Sara?. However, these roles could not prepare us for the unexpected ways that both are used in the thrilling Apple TV+ series Now & Then. This dark and twisty series works really well in that their perceived characterizations almost work against them in this whodunnit. Yazpik, who is terrifying as the Lord of the Skies Amado Carrillo Fuentes in the Narcos franchise, and Cardona, the obvious suspect at the start of Who Killed Sara?, jailed for 18 years and head of a criminal organization, are just two upstanding citizens on the show racked with guilt and grief over the mysterious death of their close friend Alejandro twenty years earlier. Almost everyone in Now & Then is a suspect, and the friend group at the core of the show sit on a cascading number of shocking secrets until new information emerges in the present day. The show alternates between the past and the present, and in the present, we see that Marcos (Cardona) is an extremely wealthy plastic surgeon, and Pedro (Yazpik) is an aspiring mayoral candidate. As the show progresses, however, the audience begins to suspect that the near perfect lives of Marcos and Pedro might not be so perfect in this bilingual thriller.

For the exclusive Apple TV+ virtual video junket day for the thrilling edge of your seat show, Brief Take insisted on booking interview time with both Yazpik and Cardona. They impressed us to such a degree on this show and we were curious to see the men behind the characters and what they might reveal. As it happened, both chose to forego translators and spoke to us in English, and what they have to say about Now & Then might really surprise and prepare you for watching the show.

Click below for more with José María Yazpik and Manolo Cardona:

The first three episodes of Now & Then are now streaming on Apple TV+. New episodes will be released weekly on Fridays.