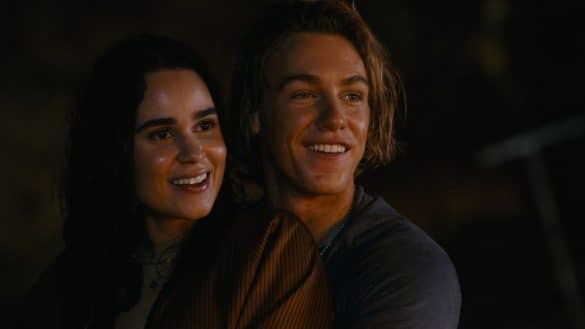 In a true ensemble series that features a young, attractive and diverse cast, it seems as though One of Us is Lying season two leads Marianly Tejada, originally from the Dominican Republic, who plays the scholarly Bronwyn Rojas, and Cooper van Grootel, who plays Nate Macauley and who is originally from Australia, appear to be the two breakouts of the series, especially when it comes to each other, (you’ll see what we mean in the below video). For the second season in a row, at each One of Us is Lying junket for which Brief Take was invited to participate, Tejada and van Grootel happened to be paired. This is significant as this was the single pairing that happened to be in the same room two years in a row, and not in a virtual room; in a real life room together, and this time, it appeared to be some sort of attic. Marianly Tejada and Cooper van Grootel this time showed off some of their games (they are mainly secret handshakes and elaborate clapping rituals with a large degree of difficulty which the pair happened to nail every single time, which they play with each other on set before filming). Tejada and van Grootel opened up to us in regards to a few of their favourite memories from set, (you’ll be extremely surprised as to their favourite memory). Furthermore, this telegenic pair discussed how they’ve been moved by some of their fan reactions and interactions. Previously, we sat down with this talented pair as One of Us is Lying‘s Marianly Tejada and Cooper van Grootel gushed about each other, discussed details about working with Jennifer Morrison, and revealed fun facts about themselves in a video interview for Brief Take.

In a twist from this season, we also spoke with One of Us is Lying‘s season two showrunner / executive producer Erica Saleh as she chatted about what is coming up in season two, the fan reactions she received after season one was released (including which characters she hears about most often), and her hopes (and ours) for a potential season three of One of Us is Lying.

Interview: One of Us is Lying’s Annalisa Cochrane, Chibuikem Uche and Jess McLeod