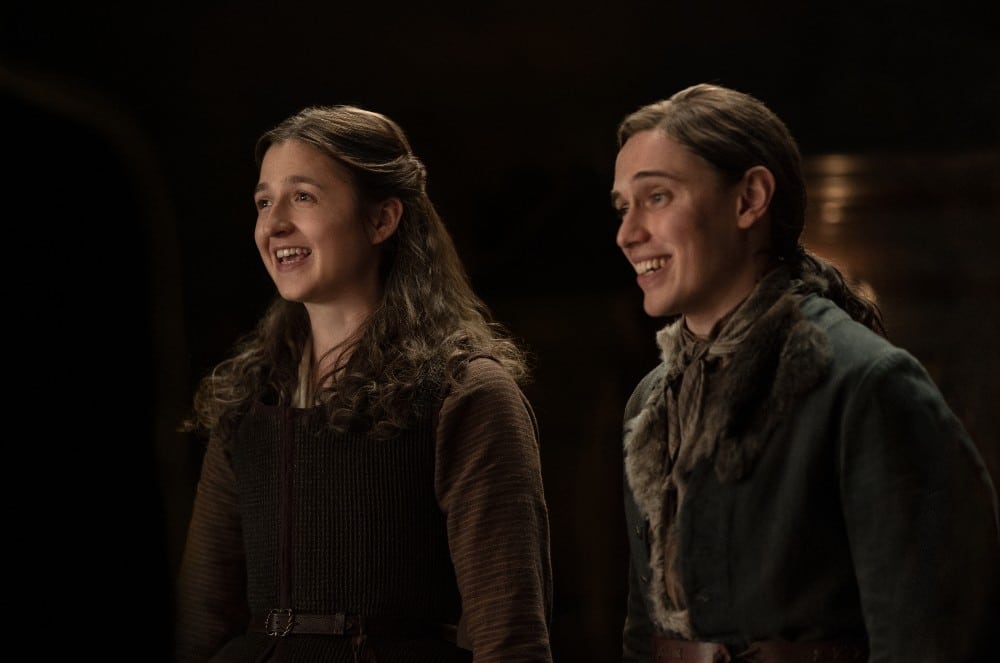 If you’re a longtime reader of this site, then you know that we’re passionate fans of the show Outlander, which Brief Take has covered extensively over the years (featuring exclusive interviews with the show’s Richard Rankin, Sophie Skelton, Graham McTavish, Tim Downie [twice]. We are all over this juggernaut of a show that is now going on its sixth season, showing no signs of slowing down and just getting better and better, based on the extremely popular Outlander book series by author (as well as show producer) Diana Gabaldon. A clear example is that every time the series experiences moments of trauma, especially those that are inflicted on Claire Fraser (Caitríona Balfe), a more upbeat moment comes along to lighten the mood a little bit. Say hello to the upbeat moment. This season sees the introduction of a new plot line in which Lizzie Weymus, played by Caitlin O’Ryan on the show, is in a relationship with not only one twin, Josiah Beardsley, but his twin brother as well, Keziah Beardsley (both played by Paul Gorman). That’s right, the Beardsleys and Lizzie are in a three-way relationship, or a throuple, if you will. Every time the drama gets a little bit too heavy on Fraser’s Ridge, we have O’Ryan and Gorman to bring a few moments of lightness to season six of Outlander. And speaking of moments of lightness, while sitting down in a virtual video interview with the talented duo of O’Ryan and Gorman, everything was going well until Gorman was suddenly muted or seemingly we couldn’t hear him as well. As it turned out, Gorman’s father’s cat wanted to get in on the fun, and continually tried to mute Gorman’s Zoom microphone, (which is certainly a lot of fun on our end, perhaps less fun on his part), until finally, we asked Gorman to bring the mischievous cat into the frame to stop from causing any more mischief during the interview (we suspected having his emails pinging would be the next trick up the cat’s sleeve). Following the adorable cat’s quick cameo appearance, the actors sold the heck out of their series. If we weren’t already huge supporters of Outlander, Caitlin O’Ryan and Paul Gorman definitely would have made us one by the end of the interview. You’ll definitely want to click below for more with Caitlin O’Ryan and Paul Gorman of Outlander.

Outlander airs Sundays at 9 ET/PT on the W network