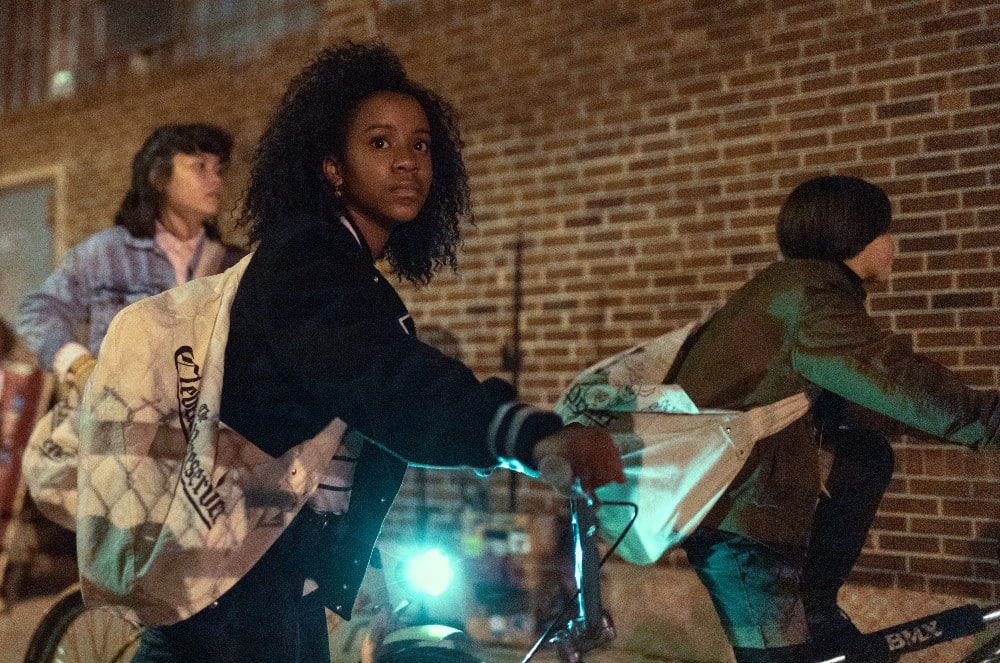 What we adore about the Prime Video series Paper Girls is that the show feels so real, and if you haven’t yet gotten on board with this breakout hit of the summer (described as similar to Stranger Things, but really is so much more), then hopefully this will convince you to catch the aesthetically, sonically and overall pleasing and mature series. In order to better get a handle on Paper Girls, we booked an exclusive Zoom video interview with one of the girls, super strong lead Tiffany Quilken, played extremely capably by rising star Camryn Jones. We now get the impression that Jones was the first one to be cast among its four leads (the others being Riley Lai Nelet, Sofia Rosinsky and Fina Strazza). The Prime Video show, based on a comic book series by Brian K. Vaughan, an executive producer on the show, drops the viewer right into the middle of the action on Halloween night in 1988. Four newspaper girls, (who happen to be 12-year-old paper delivery girls) outside of Cleveland, Ohio (with the real life city of Chicago subbing in), get caught in the middle of a time travel battle, wake up in the future (in 2019, to be exact), as one of the girls comes face to face with her future self (played by comedian Ali Wong). There are many more surprising twists to come, but despite the description, features extremely adult content. In fact, Camryn Jones seemed to perfectly understand the extremely unique nature of the series, describing how the eighties tracks ‘Blue Monday’ by New Order and ‘When Doves Cry’ by Prince (this show has a killer soundtrack) inspired her in part. Also, Jones shared how the show dropping that day had yet to affect her, which was pretty profound as she had been attached to the sci-fi drama since October 2020. Jones recently participated in her first Comic-Con, first panel, and yes, first press junket. Click below for much more from Paper Girls‘ breakout star, Camryn Jones:

Paper Girls is now available to watch on Prime Video