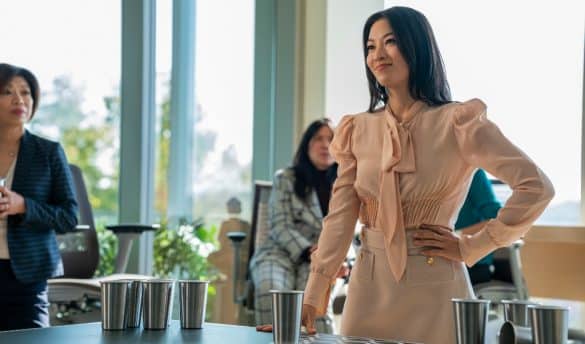 Your new favourite late summer binge (if it isn’t already) is going to be the Georgia Lee-developed Netflix series Partner Track. The lead of the series is Arden Cho, perhaps best known as Kira Yukimira on Teen Wolf or from a series of videos that she created with Wong Fu Productions, and Cho is the ideal lead, as we discovered on the Netflix junket. Cho is fun, extremely personable, was actually dancing to herself when we entered the virtual junket room, and is extremely proud of the series having an Asian-American female lead and creator.

What sets Partner Track apart from other shows (aside from the dynamic performance of its lead, Cho, as Ingrid Yun), is that there is something for everybody to enjoy in terms of interesting and juicy plot lines. There is the fact that Ingrid had a one-night stand with Murphy (Shadowhunters‘ Dominic Sherwood), a couple of years back, and oops! He’s been transferred to the New York office of Parsons Valentine & Hunt (you guessed it, Ingrid’s law firm), just as Ingrid is entering into a brand new and quickly moving relationship with Nick Laren (Rob Heaps). As well, the go-getting Ingrid is determined to make Partner Track (hence the show’s title) at the extremely competitive law firm, and one case in particular pairs her with the aforementioned Murphy (uh-oh!) but also has her working with Desmond Chiam as Zi-Xin “Z” Min, which involves Ingrid trying to stay true to her beliefs, win the case, and still make partner. Complicating matters is that her sister Lina (Lena Ahn) is constantly getting herself (and her sister) into trouble, and her best friends Rachel (Alexandra Turshen) and Tyler (Bradley Gibson) have issues of their own to deal with at work. Cho was quick to praise the work not only of frequent scene partner Sherwood, but everyone in her cast, remarking how rare it is to have a cast in which everyone truly gets along with each other. As well, Cho capably set the stage for surprise turns to come, so if you haven’t started binging yet, you’re going to fall hard for Arden Cho’s Ingrid Yun and Partner Track.