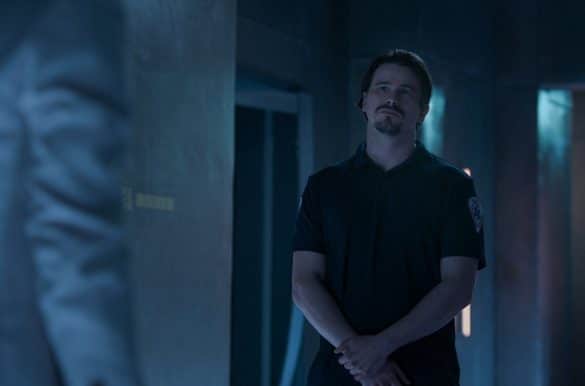 Simply put, Raising Dion‘s Jason Ritter is one of the kindest actors in Hollywood. We have heard this from his colleagues and co-stars (including Raising Dion‘s lead, Alisha Wainwright). And quite frankly, we know this to be the case from previous interviews with the third-generation star, having spoken to him multiple times in the recent past and finding him to be absolutely wonderful each time. This is made clearer by the fact that his character in Raising Dion, Pat, is sort of the embodiment of evil. Well, not so much Pat, who comes across even more like a toxic male, especially in his interactions with Alisha Wainwright’s Nicole Warren. The main villain of Raising Dion is the Crooked Man, but the Crooked Man takes on different forms, including in most of season one, of Pat. And yet the start of this season discovers a now powerless Pat has again reappeared in the lives of heroes Nicole Warren and son Dion (newcomer Ja’Siah Young). What is Pat doing alive? Well, Jason Ritter, in an exclusive one-on-one Zoom video interview with Brief Take, gave us some answers. Ritter discussed how his experience playing Pat helps to fill in the gaps as to what this fan favourite Netflix series is attempting to do in an extremely ambitious season two of the popular series. Moreover, Ritter made sure to single out the performance of Alisha Wainwright, along with collaborating a lot more this season with Jazmyn Simon, the portrayer of Nicole’s older sister Kat Neese. The balancing act of Pat is brought to life so well from Jason Ritter, and please click below to watch our in-depth conversation.